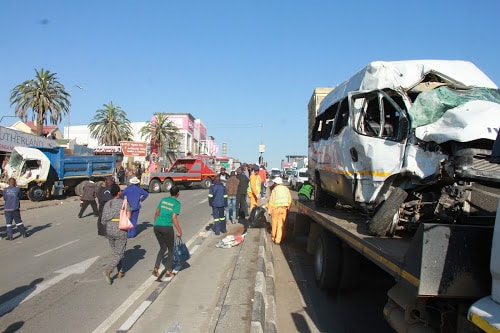 Five people were killed and 15 others injured when a tipper truck collided with a minibus at the intersection of Sutherland Street and R61 in the Mthatha CBD at about 3am on Wednesday. CCTV footage has revealed how the accident happened.

In the video, the tipper truck appears to speed through the intersection despite the traffic lights being red as the minibus approaches from the left.

It then hits the front section of the minibus, which is towing a trailer. Both vehicles then end up on the opposite side of the intersection.

“SAPS can, however, confirm that a culpable homicide case is under investigation.

Four women and a man were killed instantly.

The injured were rushed to the Nelson Mandela Academic and Mthatha Hospitals.

The latest carnage brings to 28 the number of victims killed in car crashes on Eastern Cape roads since the beginning of September, according to reported accidents.

Meanwhile, transport MEC Weziwe Tikana-Gxothiwe on Wednesday expressed condolences to the families of the victims of the Mthatha accident.

“We can barely imagine the pain and trauma their families are going though at this stage, for we know that we are talking about hawkers here, who are mostly women — mothers and wives — who died trying to fend for their families,” she said.

“Our thoughts and prayers as the department are with their families at this time.”

The MEC said the latest incident came at a time when the province was experiencing a surge in fatal road accidents and urged motorists to obey the rules of the road and to respect one another on the roads.

“The executive mayor has expressed sympathy for the families of those killed and injured in the accident. The municipality, working with the police and traffic officials, will do everything in its power to make sure this does not happen again,” said Mampoza.