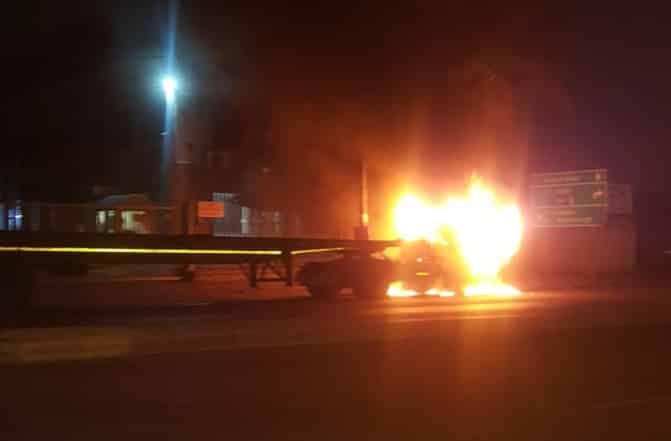 Durban – Two trucks were set alight on South Coast road near Rossburgh on Thursday night. This after threats by Durban transporters to embark on a shutdown of the Durban harbour citing operational inefficiencies there.

At the time of publishing, two trucks had been destroyed and no information of casualties was immediately available.

Delays and backlogs at the Durban Port has frequently caused traffic chaos in the harbour area and surrounding surburbs.

Hundreds of trucks clogged roads into and out of the Bayhead area including Umbilo, the Bluff and Maydon Wharf. This left commuters stranded for up to five hours in traffic.

Metro police spokesperson, Senior Superintendent Parboo Sewpersad, said they had deployed officers to help with the congestion. “We’ve also set up a system to help with the contraflow of traffic. We urge residents to stay away from the area until it has cleared.”

SA Trucker on Tuesday warned that truckers were planning a stayaway from the Port of Durban as a result of their dissatisfaction with operational inefficiencies there.