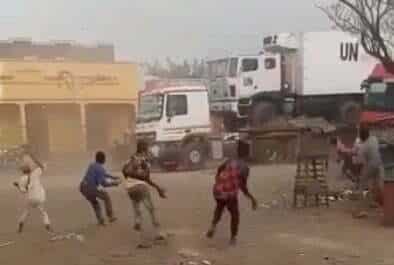 Watch: Trucks Under Rebel Attack Speed Past A Group Of Rebels In DRC

Three UN staff members were wounded on Wednesday when their convoy was attacked by rebels in the Mambassa area, Lubero territory, North Kivu province of the Democratic Republic of Congo (DRC).

According to the UN, unidentified attackers opened fire on the convoy which was being escorted by ‘blue helmets’ from the UN Stabilization Mission in the DRC (MONUSCO) in the Mambassa.

Instability is rife and dozens of armed groups operate freely in the area.

A video of an attack on trucks carrying UN vehicles in the same area surfaced online. In the 30-second video, a group of men can be seen lying in wait for trucks.

Trucks Under Rebel Attack Speed Past A Group Of Rebels . Reportedly on Wednesday happened in Mambassa, DRC pic.twitter.com/zVjvEuN6pg

Pulling up at one of the many pit stops along the N1,…
Thabiso Hamilton Ndlovu, a Johannesburg businessman who instantly became famous back in…

Durban – The Hammarsdale Interchange on the N3 will be closed on…