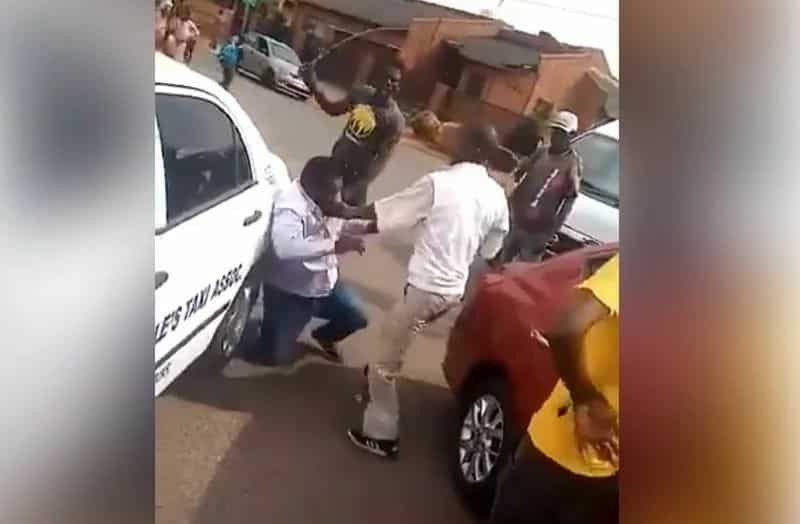 Mamabolo’s sentiments followed the arrest of a suspect on charges of assault for allegedly inflicting injuries on the Uber driver on Thursday. Another perpetrator involved in the attack was being sought by police.

“I am appalled by the level of savagery and hate displayed by the individuals who perpetrated this act of violence. These acts are unacceptable and must be condemned. We pledge our solidarity with the victim and wish him a speedy recovery,” said Mamabolo.

Videos trending on Twitter show the hapless taxi driver, only identified as Mulalo, being severely whipped by two men forcing him into a marked Katlehong People’s Taxi Association car. Mulalo’s extensively damaged vehicle, a red Nissan Almera is seen in the video.

Can we make this video trend. A bolt, uber driver was harassed in katlehong by the association. Why would you do this to someone who is only trying to make a living?#rosemaryndlovu Boohle MacG pic.twitter.com/wkTl4fzuRX

The Katlehong People’s Taxi Association members also reportedly stole a spare wheel and money from the Uber driver after he had picked a client.

Mamabolo has called on law enforcement to “apprehend each and every individual” who was involved in the crime.

“We have come a long way as a province in dealing with minibus taxi violence. This incident is an affront to the efforts of so many peace-loving people within the taxi industry and the people of Gauteng. These individuals should face the full might of the law,” added Mamabolo.

He said the Gauteng department of roads and transport has made significant strides together with the taxi industry in rooting out violence in the volatile sector since the July 2019 Gauteng Taxi Summit held in Emfuleni Local Municipality, Sedibeng.

“Together with the provincial South African National Taxi Council (Santaco) and the Gauteng National Taxi Alliance and their various associations, the Gauteng provincial government has availed platforms for dispute resolution in an effort to avert violence as means of resolving problems in the public transport sector. We have made tremendous progress in this regard,” said Mamabolo.

He added that the latest incident of violence should not be allowed to undermine the efforts that have been made in ridding the province of taxi violence.

“All our interventions in the taxi industry were to ensure that the industry sheds its negative public perception and takes its rightful place in the public transport value chain,” said Mamabolo.

A Katlehong Taxi Association member who mercilessly assaulted an Uber driver has been arrested pic.twitter.com/TxHq1tD5eA

Earlier this year, e-hailing cab drivers in Pretoria told the African News Agency that lucrative public transport hubs like the Bosman station in the central business district had been declared a no-go area for them and that they faced frequent violence and hijackings.

“What is worse is that now, even a member of the public driving his/her Toyota Corolla, Toyota Etios or Nissan Almera can be pelted with stones and sjamboked at Bosman because these cars are believed to be Taxify [now called Bolt] or Uber,” one said.

“There is a police station at Bosman station but the police officers there are busy with something else.”

In May, a timely intervention by an off-duty Johannesburg Metropolitan Police Department (JMPD) officer saved a driver for e-hailing cab service Bolt who had been hijacked and bundled into the boot of his car, while it was being stripped. IOL

Roland Muchengwa, the ‘blesser’ in the viral video with some young girls…

Durban – Nine suspects have been confirmed dead and one arrested following…

A manhunt is underway for four men who, pretending to seek help,…