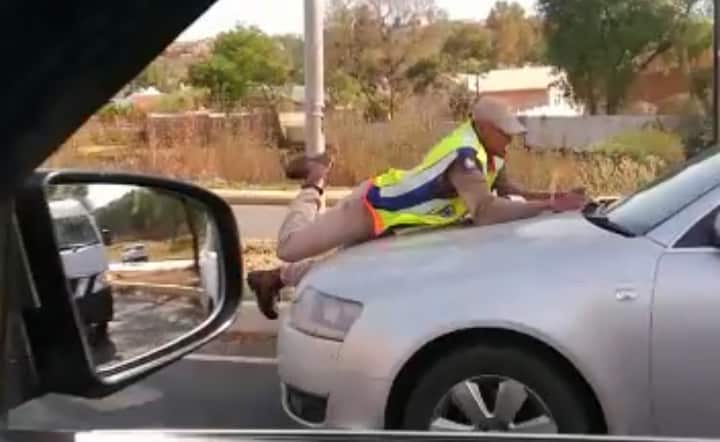 Watch: Woman arrested for driving with traffic cop hanging on her bonnet

A 27-year-old female driver has been arrested for trying to evade a ticket for using her cellphone while driving by pulling away with a female Gauteng Traffic Police officer on her bonnet.

The incident happened in Krugersdorp on Friday, September 13 and the footage has since gone viral on social media.

The driver was arrested for failing to comply with an instruction from a traffic officer, reckless driving and resisting arrest.

A fine was also issued for driving while on a cellphone.

Departmental spokesperson Ofentse Morwane said: “The conduct displayed by the driver is not only reckless but also smacks of arrogance. With the province experiencing a high number of unnecessary crashes and fatalities on our roads, it is of utmost importance that our law enforcement agencies should stamp their authority on those who disregard the rules of the road.

“Drivers are supposed to conduct themselves in a manner that is acceptable and respect authorities. The conduct of the driver in question is punishable at all costs and will never be allowed. Irrespective of the attitude of road users, we will continue to stamp our authority and do our work without fear and favour,’’ said Morwane.