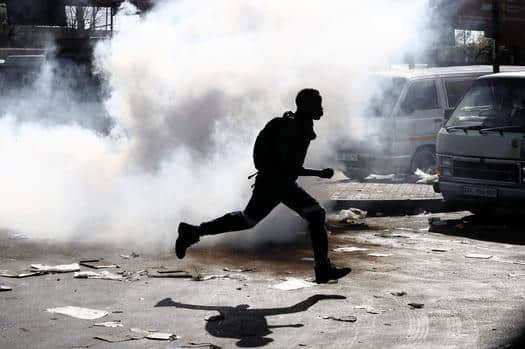 A Zimbabwean truck driver working in South Africa lost all his property after a group of local thugs calling themselves ‘Mzansi wethi’ ransacked his rented home in Jeppestown near Johannesburg during the recent upsurge in xenophobic attacks.

In an interview with VOA News, 45-year-old Emmanual Manyere said that he is now considering going back home. He said:

… They attacked Jeppestown where I’m staying. They managed to break into the house and they took whatever they wanted and they burnt everything, things like (my) refrigerator, radio, tv (television) and when I came from work I found nothing.

Right now I’m left with the clothes I was putting on that day. At the moment I haven’t gone back to work because I don’t even have (decent) clothes.

… As I’m talking to you right now I haven’t been going to work for one week and here in South Africa as a foreigner if you don’t go to work you don’t get paid and you can’t go to work with rubbish clothes.

So, I need to raise some money to buy some (the company) uniform that was burnt.

My situation is bad … And I don’t know, I don’t know what I will do next. It’s really bad.

All of them are saying come back home father, come back baba, come back but as Africans, you can’t get back home without something (for your family). If I can raise some money, I’m thinking of going back home. I’m so traumatized.

Another Zimbabwean man is said to have lost his life during the attacks but this has not been confirmed.

So there is a media blackout on the death of Isaac Mabandla ,a Zimbabwean who was burnt alive in Mandela Park yesterday morning? #XenophobiaSouthAfrica #Ramaphosa #SABCNews #Mugabe pic.twitter.com/a8XF8FJKYJ