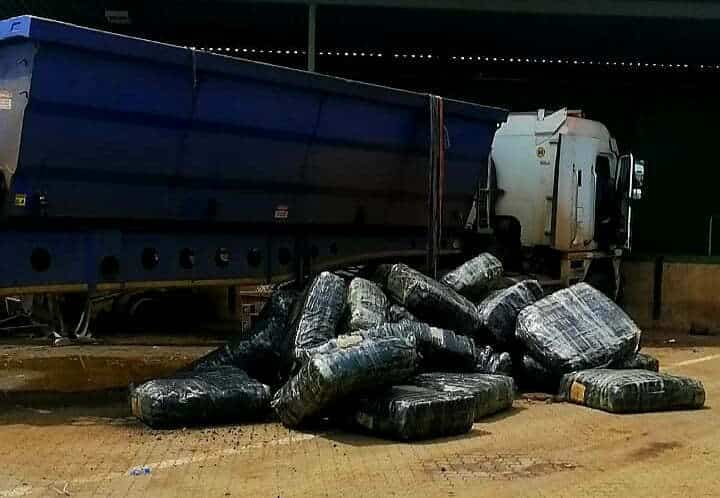 Mpumalanga police have arrested a 37-year-old Zimbabwean truck driver after they found him smuggling a consignment of counterfeit sneakers worth R3, 8 million from Mozambique.

The man whose identity is yet to be revealed was busted at Lebombo border post on Thursday last week.

“Reports indicate that members of the SAPS from Lebombo Border were on duty on the said day when they noticed a suspicious truck driven by a certain man.

“The truck was travelling from Mozambique into the country and the members then conducted a search leading to the discovery of various brands of sneakers starched inside.

“The man, who is a Zimbabwean National was then arrested and charged for possession of counterfeit goods,”said Brig Mohlala.

He said the suspected is expected to appear at the Komatipoort Magistrate’s Court on Friday.

The senior police officer said the truck, which is valued at R3, 5 million had been confiscated along with the counterfeit sneakers.

The incident comes a few days after another 31-year-old Zimbabwean truck driver, Tonderai Moshayi, was arrested for attempting to run over a traffic police officer at the same border post.

His fellow countrymen, Patrick Ncube (31), was also arrested after he attempted to bribe with R4000 a senior traffic police officer in the Komatipoort area to secure Moshayi’s release.

The matter is now under investigation by South Africa’s organised crime unit, the Hawks.

“It is alleged that on 17 November 2021, Tonderai Moshayi from Zimbabwe who is a truck driver was at Lebombo Port of Entry when he bypassed other truck drivers who had queued for their turn to cross the border.

He was stopped by the traffic police for a routine inspection of the truck. When the routine check was done, it was discovered that the truck had an expired disc,” she said.

After which, Moshayi was asked about the documents of the truck, and he became violent and drove away nearly running over the traffic officer.

He was then pursued and he stopped the truck, and locked himself inside the truck, refusing to talk to the traffic police officers.

The man only gave in at the persuasion of his employer in Limpopo province.

He was arrested and charged for attempted murder and operating an un-roadworthy vehicle.

“On the following day, other Zimbabwean truck drivers contributed an amount of R4 000 and allegedly went to approach the traffic officer, who had arrested Moshayi to secure his release.

It is further alleged that they initially promised to give R10 000. The traffic officer reported to the Hawks that he was being offered a bribe and a trap was set leading to Ncube’s arrest when he came to deliver the bribe money,” said Capt Sekgotodi.

Sam “Mshengu” Chabalala, 25, will know on Monday if he will be…

Durban – Police have rescued a truck driver who was hijacked in…