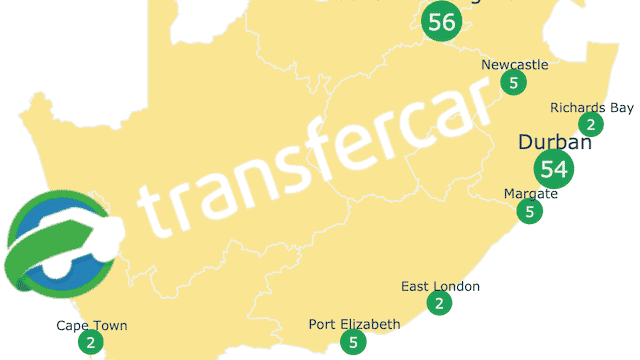 One-way travellers – especially between Johannesburg or Durban – can now “rent” cars for R1 per day, excluding insurance and the usual costs such as petrol and toll fees.

And if the company behind the service has its way, thousands of South Africans will be doing just that in years to come, reports Business Insider South Africa.

The company behind the offer is Transfercar, a service that connects car rental companies that need to move vehicles around the country with potential drivers.

It was started in New Zealand 10 years ago, then expanded to Australia two years later, and opened locations in the USA and Canada four years ago.

On August 10 it started up in South Africa, where it is currently in a trial period.

This week Business Insider South Africa found that the company had 122 cars available for relocation across the country. Of these 57 needed to be relocated from Johannesburg to Durban, and a similar number were due to be moved from Durban to Johannesburg.

“The driver rents the car for R1 a day in return for relocating it, and the rental company gets a free driver.”

A far smaller number of cars were available to be picked up in Margate, Newcastle, Port Elizabeth, Cape Town, East London, and Richards Bay.

Transfercar is testing the concept with a major rental car company it did not want to name. If it proves viable in South Africa, the company hopes to facilitate a few thousand rentals per year, Transfercar chief marketing officer Pascal Languillon said in an interview.

“Two thousand, three thousand or four thousand a year. It’s in that range.”

Since the launch in August, “a few dozen” trips have been booked in South Africa via the Transfercar website, Languillon says.

Cheaper than trucks – but no free petrol for now

Rental cars are usually moved by truck, after being loaded onto a specialised trailer, or by professional drivers at great expense, Languillon says.

To avoid such costs some of the rental companies offer free petrol or even free toll fees during the relocation period, Languillon says, and even then they are paying between a quarter and a fifth of what they would otherwise.

For now, at least, free petrol is not on offer in SA.

Volunteer drivers who want to use a vehicle for more than the single day – during the period when the rental company wants it relocated – can rent it for longer at something close to normal rates.

The most expensive daily rental for a vehicle on Transfercar’s local website is R1,204 per additional day for VW Tiguan, while the cheapest vehicle currently is a VW Polo Vivo, which is priced at R325 per day.

Most of the cars that are up for relocation on the Transfercar South African website are sport utility vehicles.

“That is because of the current requirement of the rental company. In the future we hope to have camper vans,” Languillon says.

Transfercar makes its money from the fee it charges the rental companies for each vehicle relocation.

HARARE – A suspected Zimbabwean border jumper has died after being attacked…