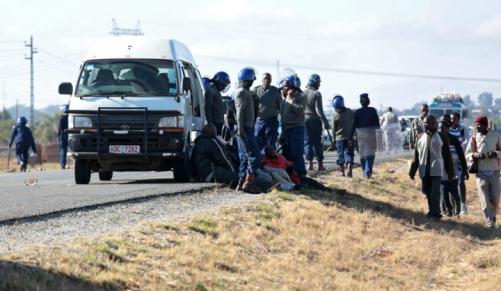 Former Zimbabwe Vice-President Joice Mujuru has called on President Robert Mugabe to call for fresh elections in the face of a collapsed economy, saying her newly-formed party, Zimbabwe People First, was “the future” and had the “solution”.

Speaking at a state of the nation address at her Chisipite home in Harare on Tuesday, Mujuru called on protesters to “respect life, protect property and respect other people’s views”.

Police drop off passengers on Mutare road outside Harare, Zimbabwe. Photo: EPA/Aaron Ufumeli. Credit: EPA
“Instead of repressing and suppressing the popular sentiments among the people manifesting in the demonstrations, government has to address the causes of the myriad problems facing the country,” she said.

“In view of these myriad problems, we challenge Robert Mugabe to call for fresh elections now to get a new mandate if he thinks people have forgotten his promise of two million jobs.”

Mujuru said government’s decision to ban imports of basics without local industry to competitively meet that demand was “unfortunate and ill-timed”.

“The importation of basic commodities was providing a livelihood while meeting the gap caused by lack of local industrial production. This is even more telling when such a decision was taken when there is rampant unemployment at over 80%,” she said.

The former VP – kicked out of government and Zanu PF for allegedly plotting to topple Mugabe – also took a dig at her former boss and top government officials who sought medical attention in foreign lands, saying: “If indeed we are genuine in protecting local industry, why are we not extending the ban to all sectors of the economy, including access to foreign medical facilities and services? The local health system has collapsed; it needs the same kind of support.”

Mujuru made the remarks as activists have called for a nation-wide shutdown Wednesday, saying they want government to address a host of challenges the country is going through.

Mass protests have been taking place around the country in the past few days, the latest being in Harare and suburbs surrounding the capital city.

On the issue of the mass protests, war veterans on Tuesday called for peaceful demonstrations.

“Government should give appropriate solutions to problems that are of social, economic and political nature. Government should hear from the people or sections of society that are registering dissatisfaction with the services of government,” he said.

“People do not want tailor-made solutions to social and political problems. They are often resisted because they will not be as suitable as solutions that come up from the people,” he added, echoing Mujuru’s sentiments who had earlier said the bans were meant to benefit Zanu PF cadres.

On the other hand, the National Election Reform Agenda (NERA), a grouping or progressive political parties fighting for electoral reform in Zimbabwe, said they fully supported the spontaneous mass action by Zimbabweans over the past few days.

In a statement Tuesday, NERA said the mass action had been triggered by “the economic decline that has confined our people to poverty and misery”.

“For NERA, the root cause of these problems is the crisis of legitimacy itself created by unfree and unfair elections. Therefore, the only answer is a change of government through free and fair elections. We will continue to support this mass action until people’s demands are met,” the grouping said.

Civic society organisations condemned behaviour which it is said was “criminal for the government to abuse its resources and power to crush ordinary citizens as being observed in the Beitbridge, Epworth, Mabvuku and other areas where protests are underway”.