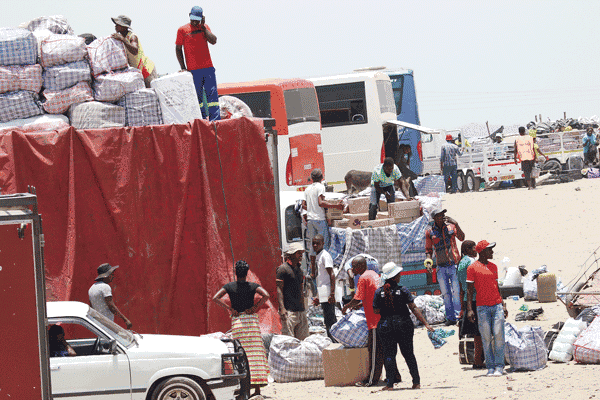 The Zimbabwe Revenue Authority has toughened its laws on transit truckers as they attempt reduce the estimated $1 billion lost annually through smuggling, reports Newsday.

Transit truckers are accused of being the largest contributors in smuggling of goods into Zimbabwe by falsely declaring goods-in-transit while it’s destined for Zimbabwe.

In a Statutory Instrument (SI) gazetted on Saturday, transit truckers will be fined $2 000 for diverting from the route specified by the Commissioner-General of Zimbabwe Revenue Authority (Zimra).

SI 113 of 2017 also aims to bring legislative changes that improve the management of transit cargo in Zimbabwe and to buttress the Electronic Cargo Tracking System (ECTS) introduced in May.

The instrument also makes it mandatory to place the ECTS tracking system on all transit vehicles while section (e) of the SI highlights the penalties involved in tampering with the ECTS system.

Section 2 (a) (d) of the legislation, further states that transit vehicles conveying goods through Zimbabwe shall not be opened whilst in Zimbabwe and that any seals placed on the vehicles should not be tampered with.

SI 113 of 2017 also comes with a fee of $30 which transit transporters must pay for conveying goods and break-bulk cargo through Zimbabwe which have got that ECTS system.

The ECTS system is a master and slave device that was introduced in May to track transit truck in real time on the Zimra servers. At the time, there were 430 master, 1 300 slave and 887 break bulk sealing devices launched with more on the way.

For the transit vehicles that cannot be covered or sealed, these will be escorted as stated under section (l) of SI 113 of 2017:

Earlier on last week, Zimra board chairperson Willia Bonyongwe said the revenue authority found a 60% drop in transit traffic since they introduced the ECTS system, showing that over half the trucks were dumping goods in the country.

Fuel, cooking oil, second hand clothes, cigarettes, furniture, milk products, tooth paste, detergents, maheu, and fuel among others are the goods that are mostly smuggled into the country.

Most of smuggled goods are reportedly coming from Mozambique, Tanzania and South Africa.