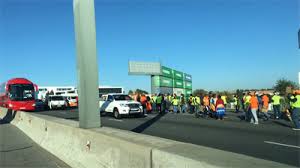 Over 100 workers affiliated with the Transport and Allied Workers Union (TAWU) protested on the highway to show their unhappiness with the roads agency.

They say they have been demanding a salary increment, claiming they’ve had no increases since 2012.

Those employed by Teti Traffic, a service provider of SANRAL, claim they are being ignored.

They say they tried to march to SANRAL’s offices but were met by police officers.

The employer, however, claims this is not true. Teti Traffic’s Perumal Pillay says they have given increases over the past four years and adjusted salaries to fit industry norms.

Meanwhile, SANRAL has warned motorists who missed Monday’s deadline for historical debt payment, that they will now pay the
full price.

The roads agency claims that over 300 000 defaulters took advantage of the 60% discount.

However, the Organisation Undoing Tax Abuse (OUTA) says the numbers should be taken with a pinch of salt.

“SANRAL has given contradictory numbers in the media and lied in the past. Even if its 500 000 – we have 2.5 million road users and that’s not a success”