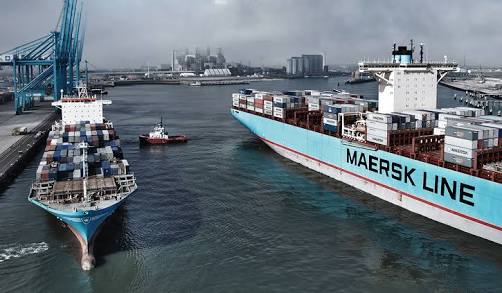 It’s the end of an era for Maersk

The owner of the world’s largest container shipping line will stop ordering newly built vessels and instead pursue takeovers in an industry that has been plagued by overcapacity for almost a decade.

“If Maersk Line needs to grow, it doesn’t make sense to order new ships as there are already too many ships in the market,” Rasmussen said. “So if we want to grow, we need to do it through acquisitions so that we don’t flood the market with more ships.”

Maersk Line still has 27 ships in its order book, corresponding to about 12 percent of its current fleet. The container industry’s combined order book represents about 17 percent of the global fleet.

As recently as 2015, Maersk Line placed orders with ship yards Daewoo Shipbuilding & Marine Engineering Company, with Hyundai Heavy Industries Co. and with Cosco Shipyard Company. The ships are due for delivery in 2017 and 2018.

The 11 vessels from Daewoo will carry a record 19 630 standard-sized containers and cost $1.8 billion each. They are the second-generation version of the so-called Triple-E class vessels that Maersk developed with Daewoo. The Danish company in 2011 ordered 20 Triple-Es, which carry about 18 000 containers each.

“It has previously made a lot of sense when we went out and ordered specific vessels,” Rasmussen said. But “there’s already a large order book in the market and at the same time, world trade isn’t growing a great deal”.

Maersk on Thursday revealed a new strategy that includes splitting the conglomerate into a transport and an energy company. Rasmussen said Maersk Line is “well-equipped and ready”, for acquisitions.

While he declined to comment on specific targets, he says options include shipping lines that operate mostly on trade routes overlapping with Maersk’s, which will “give us a lot of synergies”. It’s also looking at rivals who are strong “in an area where we aren’t present,” so they “fill a hole” in Maersk Line’s network, he said.

Salt Lake City, Utah – This is America’s first hydrogen-electric long haul…
A Cypriot truck driver has been sent to jail for negligent driving…