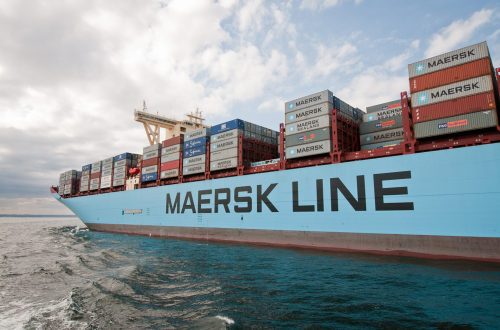 CNN Business – Maersk, the world’s largest container shipping company, has warned of a “very weak” start to the year as the coronavirus keeps factories shuttered in China and dents demand for the transport of goods.

The Danish ship operator said Thursday that it has canceled more than 50 trips to and from Asia since the Lunar New Year holiday was extended because of the outbreak. Shipping rates are expected to decrease as demand slips, the company said in an earnings report.

“We estimate factories in China are operating at 50% to 60% of capacity,” CEO Søren Skou said on an earnings call.

Maersk expects production to ramp up to 90% by the first week of March, but Skou cautioned that “obviously there are still a lot of uncertainties.”

In an interview with Julia Chatterley on CNN Business’ First Move, Skou said that with 30% of the company’s business related to China, the impact from the virus is “quite substantial.” What matters most, he said, is what happens in the coming weeks.

About 80% of world goods trade by volume is carried by sea, and China is home to seven of the world’s 10 busiest container ports, according to the United Nations Conference on Trade and Development. That means the coronavirus could have an outsized effect on global shipping.

Maersk said it expects earnings of around $5.5 billion this year, which is about 5% below what analysts had been predicting.

The company’s forecast for shipping volume growth of less than 1% is “pretty downbeat,” giving it some breathing space if the impact of the coronavirus is worse than expected, said Michael Field, an analyst at Morningstar.

The stock was trading more than 3% lower in Copenhagen on Thursday, extending its decline so far this year to 14%.

The financial impact of the coronavirus on businesses across the globe, from airlines and automakers to luxury goods firms and drug companies, is slowly becoming clearer. Qantas and Air France-KLM warned Thursday that the virus could shave hundreds of millions of dollars off profits this year.

But uncertainty around how the virus will develop makes it very difficult for companies to measure the disruption. While China on Thursday recorded its lowest number of new daily infections in weeks, South Korea reported a spike in cases.

The outbreak adds to a string of challenges facing ship operators, including overcapacity, a slowing global economy, manufacturing weakness and the trade war between the United States and China.

It also has the potential to wreak havoc on global trade, given how important China is to the global economy and supply chains.

“The coronavirus impacts all our businesses,” Skou said. “We also have a terminals business in China, and a significant logistics and warehousing business. It’s not just ocean.”

Maersk said that delays in the opening of Chinese shipping yards have pushed out repair and maintenance work on its vessels.

The company expects exports from China to be “very weak” in February, “quite weak” in March with “hopefully a strong rebound into April, May and June,” Skou said, citing an “external consensus” that the virus will peak in the coming weeks. The company’s outlook also assumes no new major outbreaks outside China.

Petrol and diesel prices are set to drop in November, thanks to…
Durban – Transnet Port Terminals has launched an automated Truck Booking System…

This website uses cookies to improve your experience while you navigate through the website. Out of these, the cookies that are categorized as necessary are stored on your browser as they are essential for the working of basic functionalities of the website. We also use third-party cookies that help us analyze and understand how you use this website. These cookies will be stored in your browser only with your consent. You also have the option to opt-out of these cookies. But opting out of some of these cookies may affect your browsing experience.
Necessary Always Enabled
Necessary cookies are absolutely essential for the website to function properly. These cookies ensure basic functionalities and security features of the website, anonymously.
Functional
Functional cookies help to perform certain functionalities like sharing the content of the website on social media platforms, collect feedbacks, and other third-party features.
Performance
Performance cookies are used to understand and analyze the key performance indexes of the website which helps in delivering a better user experience for the visitors.
Analytics
Analytical cookies are used to understand how visitors interact with the website. These cookies help provide information on metrics the number of visitors, bounce rate, traffic source, etc.
Advertisement
Advertisement cookies are used to provide visitors with relevant ads and marketing campaigns. These cookies track visitors across websites and collect information to provide customized ads.
Others
Other uncategorized cookies are those that are being analyzed and have not been classified into a category as yet.
SAVE & ACCEPT
Total
75
Share
75
0
0
0
0