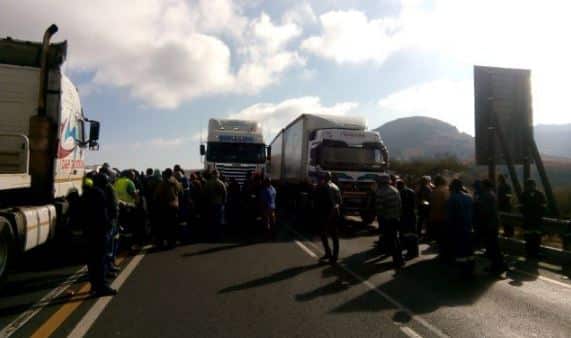 Police Minister Bheki Cele commended the police on Thursday for arresting 62 protesting truck drivers who allegedly blockaded the N3 between Harrismith and Ladysmith with their vehicles‚ saying such behaviour would not be tolerated.

“We have laws in this country and the full might of the law will be heard and felt‚” Cele said.

“Police action will be very tough in maintaining law and order. This barbaric behaviour will not be tolerated. Swift and tough action by the police is once again an indication of our commitment to maintain law and order in our country. No amount of pressure will divert our focus from stamping hard the authority of the state” he said.

He called on the trucking industry to be part of the solution and not create more room for destructive behaviour on the country’s roads. He expressed concern over the growing trend of truckers blockading roads in protests.

“If drivers are raising genuine grievances then those must be received by willing hearts and minds for a better and long lasting solution in resolving the ongoing dispute. The employment processes of the industry must take into consideration the dynamics of the high unemployment rate of South Africans while equally balancing the import of certain skills” he said.

A team comprising of the police and the defence force as well as firefighters and paramedics from KwaZulu-Natal and the Free State had been deployed to the scene after the blockade on Wednesday. Fifty one trucks‚ mostly carrying goods‚ were impounded.

The protesters’ disdain was reported by the N3 Toll Concession as being linked to the employment of foreign drivers by local trucking companies.

Earlier this week‚ a group of approximately 150 trucks from a Mpumalanga transport company stopped on either side of the N4 near Komatipoort in Mpumalanga as drivers embarked on a strike on Tuesday.

Hlasinyane Motaung of the Motor Transport Workers’ Union (MTWU) told TimesLIVE at the time that the truck drivers were unhappy because the employer had outsourced staff.

Motaung said the striking truck drivers had not blockaded the highway but acknowledged that the presence of their large vehicles on the side of the road had caused traffic to slow down.

Their grievances were resolved when the company struck a deal with the drivers.

UPINGTON – Two people died and one other is in a critical…

This website uses cookies to improve your experience while you navigate through the website. Out of these, the cookies that are categorized as necessary are stored on your browser as they are essential for the working of basic functionalities of the website. We also use third-party cookies that help us analyze and understand how you use this website. These cookies will be stored in your browser only with your consent. You also have the option to opt-out of these cookies. But opting out of some of these cookies may affect your browsing experience.
Necessary Always Enabled
Necessary cookies are absolutely essential for the website to function properly. These cookies ensure basic functionalities and security features of the website, anonymously.
Functional
Functional cookies help to perform certain functionalities like sharing the content of the website on social media platforms, collect feedbacks, and other third-party features.
Performance
Performance cookies are used to understand and analyze the key performance indexes of the website which helps in delivering a better user experience for the visitors.
Analytics
Analytical cookies are used to understand how visitors interact with the website. These cookies help provide information on metrics the number of visitors, bounce rate, traffic source, etc.
Advertisement
Advertisement cookies are used to provide visitors with relevant ads and marketing campaigns. These cookies track visitors across websites and collect information to provide customized ads.
Others
Other uncategorized cookies are those that are being analyzed and have not been classified into a category as yet.
SAVE & ACCEPT
Total
32
Share
32
0
0
0
0