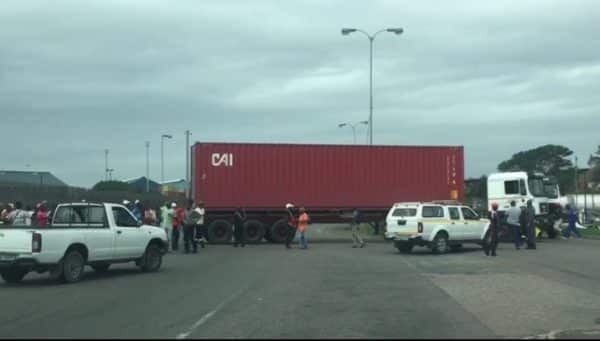 Durban – A truck driver believed to be a Zimbabwean national has been stabbed and seriously hurt allegedly by striking drivers in Durban on Monday.

It is alleged that he was stabbed by protesting All Truck Drivers Foundation (ATDF) members after they robbed him of his truck keys. They later used the truck to block the road.

Several other trucks were also hijacked and used to block off busy intersections around the Durban habour.

Police managed to disperse the mob without any incident but clearing the roads took longer because the protesters took away the truck keys with them.

ATDF is demanding that trucking companies give them jobs and stop employing foreign drivers.

“It is disingenuous for some truck drivers to block the road or engage in any protest whilst there are current engagements between government and the foundations,” said Minister of transport Mr Blade Nzimande.

Nzimande is not happy with the behaviour of the ATDF given that progress has been made in addressing their concerns. He also said they had arranged to meet the drivers but their actions showed they disregarded his authority and asked the police to arrest the perpetrators of the violence.

Meanwhile, the injured driver is recovering in hospital after he was operated on. His condition remains serious.

Watch below, SA Trucker followers shared a video of the blockade in Bayhead road near Shell garage.

Durban – The eThekwini Metro Police Department is going hi-tech, as the…