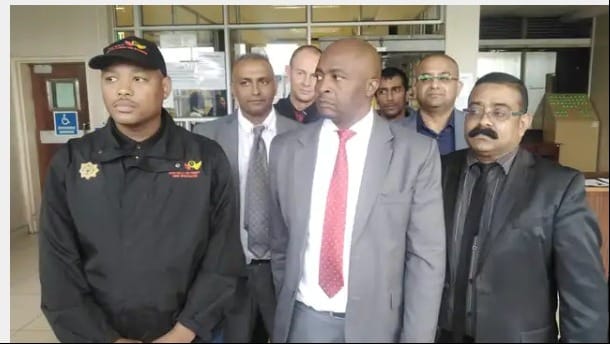 Jailed Crossmoor Transport boss’ kidnappers planned to escape, kill one amongst them

Four awaiting trial prisoners accused of the kidnapping of Crossmoor Transport financial director, Sandra Moonsamy, allegedly planned to escape jail and also kill one amongst them, it has emerged.

This was revealed in the Durban Regional Court on Wednesday where the four men appeared.

They face charges of kidnapping, extortion and attempted murder.

Hawks national spokesperson Brigadier Hangwani Mulaudzi said they could not be named because of “highly sensitive information”.

Moonsamy, a mother of two and financial manager at Crossmoor Transport Plant, was kidnapped in Pinetown last year. She was rescued six months later in Witbank on November 7.

Nxasana wanted the court to hold an inquiry into why his clients were being held at Ebongweni – Kokstad Super Max Correctional Centre instead of at Westville Prison or another facility near Durban. The legal teams said it was difficult to consult their clients.

Magistrate Anand Maharaj said the Correctional Services Department co-ordinator, NGDlamini, had previously supplied the court with a letter explaining the incarceration of dangerous unsentenced prisoners at unsafe prisons in the Durban area.

Govender said Moonsamy’s rescue came after an intense investigation. He said there was evidence that the syndicate responsible executed their actions with precision and professionalism and posed a security risk.

Before bringing them to Durban, 11 bogus attorneys and police officers had visited the men in police holding cells in Gauteng and given them cellphones.

Govender said his team was aware that part of the syndicate’s extraction team was still in Durban.

He said police soon became aware of international warrants of arrest for accused 1 and 2, for charges of kidnapping and escape in Mozambique. It also emerged that accused 2 had been hiding in South Africa for five years and had political links here and in Mozambique.

Govender said SAPS had heard of a plan hatched for the men, who had apparently split into factions, to escape from Durban Central SAPS, and that the syndicate planned to assassinate accused 2 to silence him.

Accused 1 had spoken to the SAPS and it was clear the syndicate operated in other countries like Mozambique and United Arab Emirates, and it was easy for them to get new identities. They were sent to Kokstad for their own safety, the safety of other prisoners and to prevent any escape attempts.

Had police not done so, accused 2 would not have been before the court, said Govender, as being isolated had prevented them from carrying out their threat.

He told the court accused 1 and 2 were not “men of straw” because they had financial backing and their money was kept in Dubai, UAE.

Accused 1 had received a large payment in connection with a kidnapping in Mozambique 48 hours before being arrested.

Nxasana said accused 3 and 4 lived in KwaMhlanga in Mpumalanga, while accused 1 and 2 were based in Gauteng but were born in Mozambique.

Nxasana disputed Govender’s evidence, saying there was no logical sense to his allegations. Sigcau said his client was never mentioned during the inquiry and should not be isolated at Kokstad.

Asked by Maharaj why the police had not separated the men and placed them at different prisons, Govender said this allowed the investigation team to have easy access to all four. He said accused 3 had been positively linked to two other kidnappings in Gauteng and investigations were being finalised.

The bail application for accused 3 and 4 would be heard later this month.

A tanker truck driver, Petrus Toppies has been arrested by cops at…