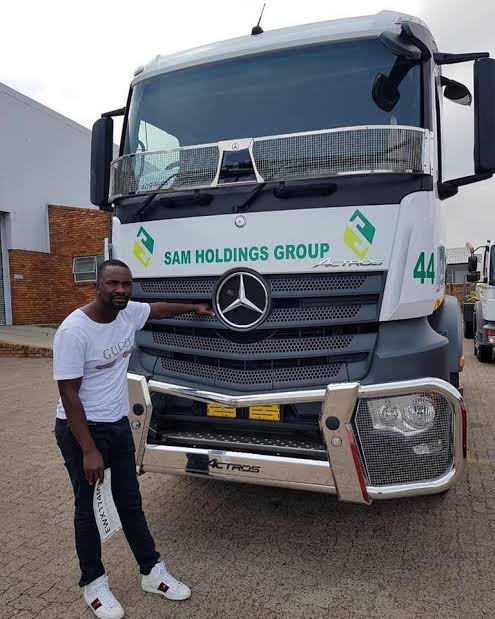 Journey to millions with Sam Mshengu of Sam Holdings Trading

It’s every man’s dream to be successful and powerful no matter from what background they come. For us in the trucking industry especially, you would fantasise owning the truck you are driving and 51 more.

This journey to millions by Sam Mshengu of Sam Holdings Trading will definitely motivate many.

From very humble beginnings Mshengu has grown to be a force to reckon with in the trucking industry.

Born in Makwarela, Venda, Mshengu opened up about his difficult upbringing, mostly due to the passing of his soldier father, who was shot dead in DRC Congo when he was only two days old.

Mshengu’s family struggled to a point of lacking food, which resulted in him dropping out of school at the age of 11.

Mshengu started working at an orange farm in Limpopo at the age of 11 as a general worker whose responsibility was to pick oranges.

He worked hard and earned his boss’ trust and was then moved to the trucking division of the company.

There he learnt everything there was to know about trucks and the logistics business.

“I learnt everything about trucks and I loved it. I can tell you everything about a truck. He [my boss] gave me an opportunity to be a truck driver and I started delivering maize and other products for him to Zambia and other neighbouring countries. He then promoted me and I started working as a controller who was in charge of truck drivers,” he said.

The knowledge he acquired from working for his boss encouraged him to start his own trucking business.

He registered his company, Sam Holdings Trading, in 2014 and used his boss’ trucks to start his business.