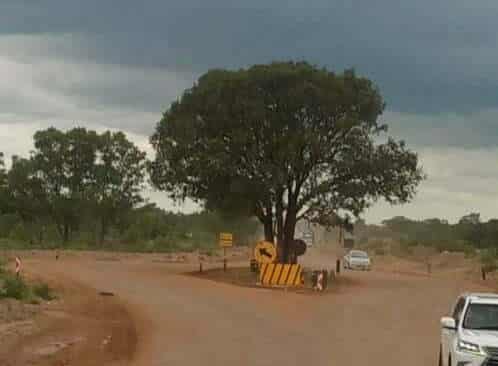 Road Constructors Baffled As Bulldozers Fail To Down Talking Tree

It’s indeed stranger than fiction and I will understand if you would like to take a trip and see for yourself this tree that everyone has failed to cut.

The tree has scars from bulldozers that tried to uproot it, axe scars are also evident after some people who don’t believe in superstitions tried their luck.

It’s in Zimbabwe on the second detour just after Beatrice towards Harare. Construction workers have confirmed that the tree uttered some words as bulldozers tried to uproot it.

“It didn’t end well for some guys who don’t believe in spiritual things and attempted to cut it down as they were attacked by a swarm of bees,” said a construction worker who refused to be named.

It’s alleged that mysterious things happen to anyone who tries to remove the tree.

“An elder from the village nearby had to be called to ask the spirits to stop the bee attack,” the construction worker added.

Since then, the construction crew decided to avoid the tree leaving it in the middle of the road as seen in the picture.

Some SA Truckers doing cross-border have confirmed the bizarre occurrence.

“I have always wondered why the road avoided that tree so when I heard the story behind it I approached the construction workers to hear it from the horse’s mouth,” said Musa Mkandawire.

He said that he was told to avoid doing funny things around that tree as it was holy. They warned him of not even taking pictures fearing something bad would befall him.

According to some sources, there is a grave for a spiritually very powerful man who died a long time ago. His spirit is said to be overprotective of this area, long before the road construction, a farmer who tried to peg his farm there suffered a lot of misfortune until he had to consult with local elders who advised him to shift his farm boundary to exclude the sacred tree.

Have you seen the tree, what have they told you?