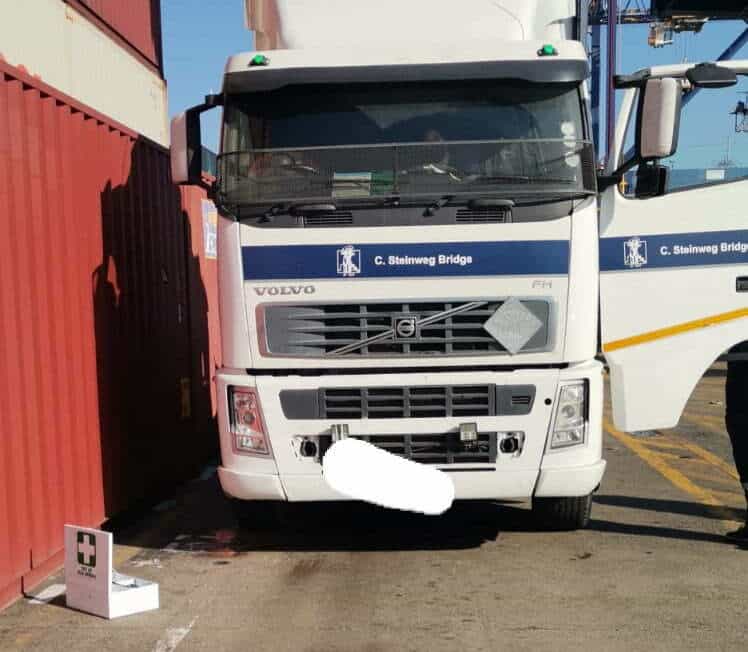 Durban Container Terminal’s Pier 1 had to close off a section of the port after a truck driver mysteriously died in his truck on Sunday afternoon.

Kindly be advised that there has been an Incident at Pier 1 Block A1 that took place at 14h30. The block is temporarily closed until further notice. Kindly anticipate delays with servicing of trucks uplifting from this block. Extensions will communicated once the block opens.
We thank you for your patience and understanding.

– Transnet wrote to its customers.

A truck driver who was at the scene explained what happened.

“I was two trucks away from the victim’s truck when I heard the crane hooting for the driver to align his trailer. He didn’t respond causing the machine opertor to keep on hooting,” said the trucker who refused to be named.

He says that he left his truck and went to the truck thinking the driver could have been asleep to wake him up.

“On arrival I found another truck driver was already there and he told me he suspected the man was not breathing,”

“His head lifelessly hung out of the window and he showed no signs of life,” he said.

“In no time, the Transnet shift supervisor was there and chased us from the scene.

“Later we were told that we would not be able to load from the block as the driver was discovered to have died,” he said.

The name of the deceased driver who was working for Sulawest Transport has not yet been released.

The cause of the death is not known at this stage. SA Trucker would like to convey our sincere condolences to the bereaved family.

Cape Town – A truck carrying more than 100 bodies was stopped…