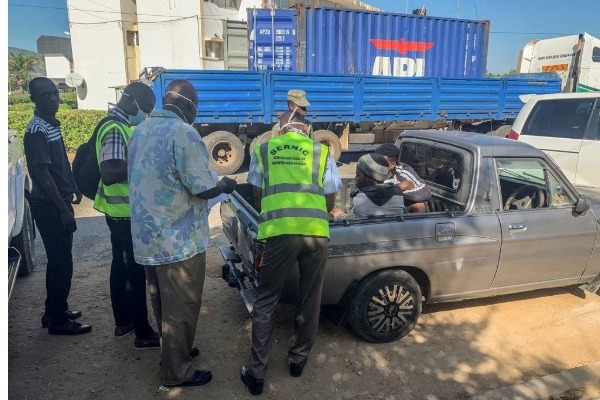 Truck driver arrested after 64 migrants die inside container in Mozambique

A truck driver and another man have been arrested after 64 people believed to be migrants from Ethiopia were found dead inside a container attached to a truck in Mozambique, provincial migration authorities and the police said on Tuesday.

Police and immigration authorities stopped the truck en route from Malawi in the early hours of the morning in the province of Tete, bordered by Malawi on one side and Zimbabwe on the other, they said.

Amelia Direito, spokeswoman for Tete migration services, said the officials checked the container after hearing banging coming from inside. They found 14 people alive among the bodies of 64 who had died from suspected asphyxiation.

The survivors were now being held at an immigration facility, she added.

Many poor migrants travel via Mozambique on their way into South Africa, where they usually hope to find better work.

The driver of the truck told a local TV station that he had been approached in Malawi by an individual who offered him money to take the migrants into Mozambique.

“Two people were detained in connection to the incident, the driver and a middleman, who contracted the driver to ferry these people,” police spokesman Orlando Mudumane said.

PORT ELIZABETH – Joint operations held between the SAPS and the traffic…

Durban – Three men have been arrested for stealing diesel from a…

This website uses cookies to improve your experience while you navigate through the website. Out of these, the cookies that are categorized as necessary are stored on your browser as they are essential for the working of basic functionalities of the website. We also use third-party cookies that help us analyze and understand how you use this website. These cookies will be stored in your browser only with your consent. You also have the option to opt-out of these cookies. But opting out of some of these cookies may affect your browsing experience.
Necessary Always Enabled
Necessary cookies are absolutely essential for the website to function properly. These cookies ensure basic functionalities and security features of the website, anonymously.
Functional
Functional cookies help to perform certain functionalities like sharing the content of the website on social media platforms, collect feedbacks, and other third-party features.
Performance
Performance cookies are used to understand and analyze the key performance indexes of the website which helps in delivering a better user experience for the visitors.
Analytics
Analytical cookies are used to understand how visitors interact with the website. These cookies help provide information on metrics the number of visitors, bounce rate, traffic source, etc.
Advertisement
Advertisement cookies are used to provide visitors with relevant ads and marketing campaigns. These cookies track visitors across websites and collect information to provide customized ads.
Others
Other uncategorized cookies are those that are being analyzed and have not been classified into a category as yet.
SAVE & ACCEPT
Total
82
Share
82
0
0
0
0