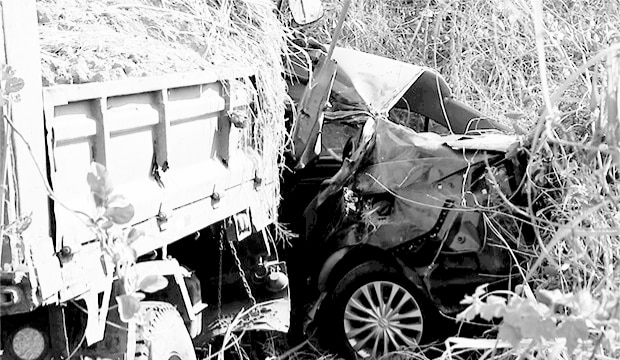 When an idiotic driver wants to pass regardless of the consequences, just let him.

A pickup truck driver and a trucker learned this the hard way after crashing off the highway together with an impatient driver.

From the video, you may agree that the poor trucker wanted to be left alone.

But, the outcome could have been different if he took the initiative to pave the way for the car.

The unfortunate accident was captured by a dashcam in a vehicle behind the three parties to the crash.

This goes on for about 54 seconds until the impatient driver overtakes from the left shoulder lane.

The maneuver ends horribly wrong as the car crashes into both the pickup truck and the truck sending all three crashing off the highway.

While the car driver was driving like a jerk, the outcome could have been better had the pickup truck or trucker gave way.

It’s a case of soft road rage, where a driver acting within his legal right, enrages another, either intentionally or not

It must be emphasized also just as in defensive driving that, being legally right doesn’t make living with permanent injuries from accidents caused by bad drivers, any easier.

The point is that you are not tasked with enforcement. Leave that to those who are.

If you see someone about to run a red light, would you cut them off to stop them? If not, then why is cutting them off to prevent them from speeding any different?

You don’t need to know why they are in a hurry, all you need to know is that your only job is to drive your vehicle safely and with care. That means avoiding erratic drivers, not boxing them in and pissing them off.

Report them, record them, anything, but do not try to use your vehicle to control their driving.

Wow! or What the heck! I don’t know how you will react…

Babcock, the sole importer and distributor of DAF Trucks in southern Africa,…
Head-on crashes are one of the deadliest type of motor vehicle collisions…