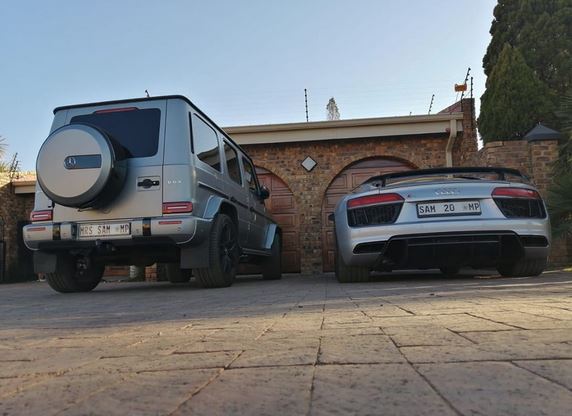 Sam Holdings owner Sam Mshengu Chabalala has been remanded in custody in yet another corruption case in which he allegedly attempted to corrupt a senior police official to get his impounded Mercedes G Wagon released.

Chabalala (25) was arrested last Thursday for corruption after allegedly paying a R120 000 bribe to a senior police official.

He was initially arrested last year and charged for fraud, corruption and possession of an unlicensed firearm. He was out on R200 000 bail following his arrest in September last year.

According to the Hawks’ Brigadier Hangwani Mulaudzi, Chabalala attempted to bribe a senior official with R120 000 cash in return for his impounded vehicle and to make his other case disappear.

Mshengu’s latest arrest comes following claims that he tried to bribe a senior police officer in Mpumalanga into releasing his impounded vehicle and make his initial case disappear.

He appeared in court on Friday for two charges of corruption, where the case was postponed to Tuesday.

Lieutenant General Godfrey Lebeya, Head of the Directorate for Priority Crime Investigation has applauded the quick response of the investigating team.

“I would like to commend the members of the DPCI who resisted the temptation by those who want to corrupt them. We shall be working towards forfeiting the money paid as gratification,” said General Lebeya.

Processes to ensure that Mshengu forfeits the R120 000 bribe money he paid are already underway.

This website uses cookies to improve your experience while you navigate through the website. Out of these, the cookies that are categorized as necessary are stored on your browser as they are essential for the working of basic functionalities of the website. We also use third-party cookies that help us analyze and understand how you use this website. These cookies will be stored in your browser only with your consent. You also have the option to opt-out of these cookies. But opting out of some of these cookies may affect your browsing experience.
Necessary Always Enabled
Necessary cookies are absolutely essential for the website to function properly. These cookies ensure basic functionalities and security features of the website, anonymously.
Functional
Functional cookies help to perform certain functionalities like sharing the content of the website on social media platforms, collect feedbacks, and other third-party features.
Performance
Performance cookies are used to understand and analyze the key performance indexes of the website which helps in delivering a better user experience for the visitors.
Analytics
Analytical cookies are used to understand how visitors interact with the website. These cookies help provide information on metrics the number of visitors, bounce rate, traffic source, etc.
Advertisement
Advertisement cookies are used to provide visitors with relevant ads and marketing campaigns. These cookies track visitors across websites and collect information to provide customized ads.
Others
Other uncategorized cookies are those that are being analyzed and have not been classified into a category as yet.
SAVE & ACCEPT
Total
53
Share
53
0
0
0
0