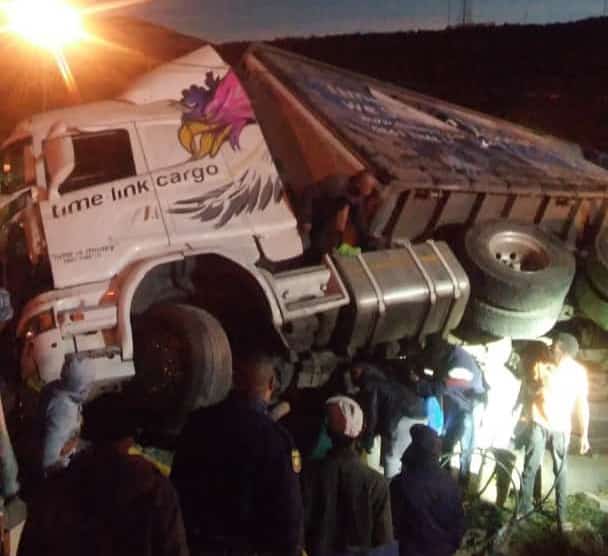 Cape Town – A truck driver from Time Link Cargo has been killed by looters after surviving a crash allegedly caused by the same people in De Doorns early on Sunday morning.

It is alleged that unknown people threw a large boulder through the windshield of the truck which knocked out the driver.

He lost control of the truck, veered off the road and crashed.

According to a witness at the scene, the driver was seriously injured but had signs of life.

He, however, did not survive for long as a mob appeared from the nearby settlement and started looting the truck.

The mob looted from the truck cab and the trailer at the same time and in the commotion trampled to death the helpless driver.

His co-driver was lucky to survive with minor injuries. He had to disappear into the dark to escape the blood thirsty mob.

Contrary to the initial suspicion by other truck drivers on social media platforms that the crash may have been caused by fatigue, a video has been released showing the boulder knocking out the driver.

In the video, a huge boulder appears from nowhere ahead of the driver crashing the steering wheel and causes the driver to lose control.

That stretch of the N1 highway is very dangerous for truckers. If you encounter a breakdown in that vicinity you will most certainly get robbed of your belongings.

Concerned truck drivers have been raising concerns about their safety on the highways to authorities but nothing have materialized yet.