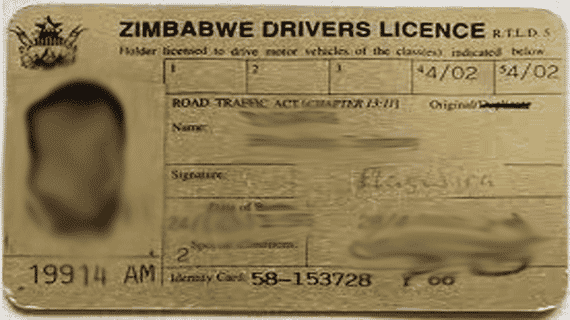 HARARE – Over 150,000 new drivers are waiting for their metal driver’s licences – but Zimbabwe can only produce 48 per day, according to shock new statistics from the Central Vehicle Registry.

Officials say the country is still using antiquated machinery to produce driver’s licences which has seen a huge backlog develop going back to August 2018.

An average 9,000 drivers are passing their driving tests every month, but only about 1,450 licences are being processed over the same period.

George Makoni, the Central Vehicle Registry’s registrar, said the crisis had been made worse by a lack of raw materials including metal photo plates and a special dye which are imported from the United States. With Zimbabwe experiencing a shortage of United States dollars, he said the government had prioritised food and fuel imports.

“It’s not anyone’s fault, it’s our situation as a country at the moment,” Makoni told the state-run Sunday Mail newspaper on Sunday, while discussing government foreign currency disbursements which favour food and fuel imports.

Makoni said plans were in the pipeline to phase out metal driver’s licences and replace them with a plastic photocard. Drivers who passed their tests since August 2018 currently only have a paper counterpart.

The production process is laborious, Makoni said. Photographs and signature sizes are manually adjusted during production.

The department also has 85 unfilled vacancies which was reducing their capacity, he added.

“All licences that we make are made using manual equipment. Our systems are not yet computerised. We are using old equipment which was acquired way back,” Makoni said.

“There is a computerisation programme called Zimbabwe Information Management System which was approved in 2018. Hopefully it will develop into smart driver’s licence to take over from the metal licence.”

Transport minister Joel Matiza said a switch to plastic photocard licences would result in import substitution with all materials made locally – but they need to work on robust security features for the new licences first.

“The government has already approved localised production. We are looking at import substitution generally. We want to localise production of all licences so we do not keep importing. There are issues of security involved and also revenue; it is a process,” he said.

Zimbabwe used to issue metal identity cards until they were replaced with the plastic ID cards starting in 2004, but the change was not extended to licences.

Durban – What caused a Durban municipal buses to catch a light?…

Mr GHJ Swanepoel, the founder of Transvaal Heavy Transport (Pty) Ltd (THT)…
Traffic has been severely affected on R511 in the North West by…