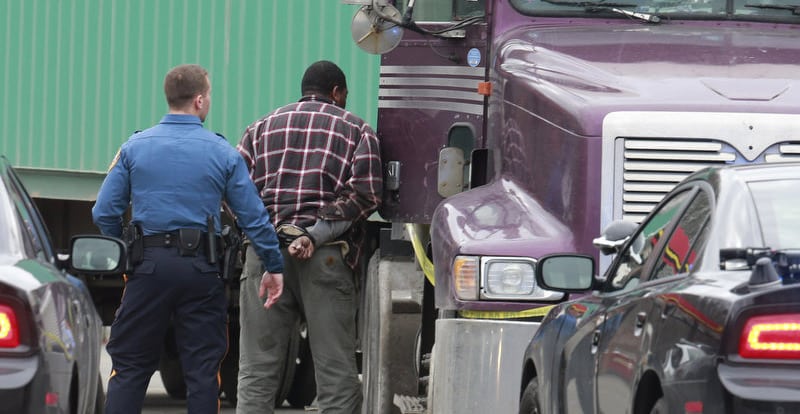 A Zimbabwean truck driver has harsh words for a Zambian woman who he accuses of causing the police to lock him up for three days on false r_ape allegations.

Mr Manzini, not his real name, told our reporter that he gave a lift to the lady at Chirundu Border Post going to Kafue and without a problem she paid the K5 he charged.

The journey went well until they got to their destination, Manzini says. It was getting dark and she asked him to stop just before getting into town where two cars parked.

“I pulled off the road and stopped to allow her to jump off but she grabbed my cellphone and took to the heels” Manzini said.

Manzini didn’t think twice, he jumped off and chased the lady catching her not far from the truck and pulled her hair forcing her to surrender the cellphone.

As he turned his head he saw two policeman approaching from the truck direction guns drawn and ordered him to raise his hands. He complied with the policemen’s instruction while shouting he was innocent and just wanted his cellphone from the lady.

Instead the lady protested and started accusing him of r_aping her and refusing to pay her.

“From there onwards I realised I could be in trouble here, but the fact that I didn’t r_ape her neither did I even sleep with her gave me some strength that I could easily be set free” he said.

But that was only the beginning of his troubles, he says police ignored his plea of innocence and the allegations that she had actually stolen her cellphone and chasing her was merely to recover the cellphone. While trying to explain himself Manzini alleges that the lady suddenly lifted her skirt to show she was pantless and pointed the pant was in the truck.

“What!” Manzini exclaimed. He says he was shocked and worried now that indeed if the pant was on the truck he was finished.

The officers climbed onto the truck and there lied the incriminating evidence just behind his seat. He recalled then that the lady had asked to sleep just for a while when they were still moving and he had agreed not knowing of her evil plans.

The police put Manzini under arrest despite his allegation of being framed by the lady. When they got to the station Manzini says one of the officers approached him saying he could speak to the complainant to drop the charges but at a fee. He refused the offer and told the officer he wanted to speak to the officer in charge.

When the Officer in charge came the following morning he told him he should give his defence in court because a charge had been laid already.

Come court day the lady did to court and Manzini was send back to the police station and the morning after was released on summons. The incident happened on 20 July and he was released on on the 23rd.