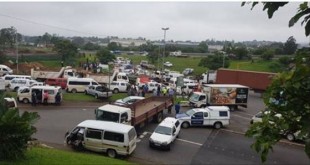 THIRTEEN people were injured when four vehicles collided at the bottom of Field’s Hill in Pinetown, earlier this morning.

It is believed a truck failed to stop at the main intersection and collided with another truck, travelling from Richmond Road. This caused the second truck to crash into a taxi. A fourth vehicle, a bakkie was also damaged in the crash.

The injured have been taken to various hospitals, however motorists are advised to find alternate routes, while the accident scene is being cleared. Traffic is heavily backed up.

Zambia – Two truck drivers have been seriously injured after their trucks…

Durban – Four people were lucky to escape when a taxi was…