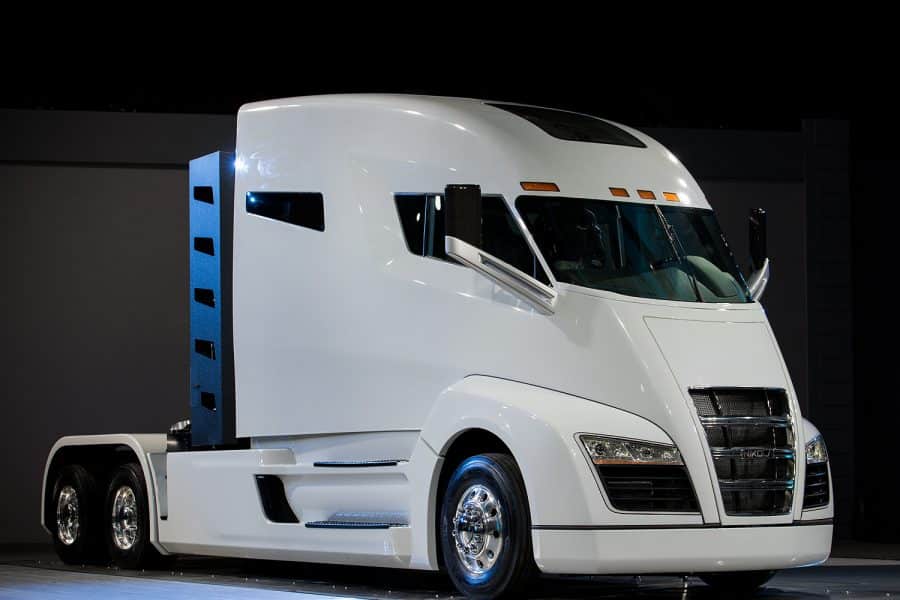 Here is the future of long-haul trucking

And we do mean long-haul. The Nikola One has a 120kW electric motor on each of its six wheels, delivering a total of more than 720kW and 2700Nm, powered by a 320kWh battery pack. That’s enough to take it from 0-100km/h in 30 seconds with a full payload of 29.5 tons – half the time taken by a typical Class 8 diesel truck.

And because electric motors deliver maximum torque at very low revs, it’ll pull harder up a hill than any diesel, without losing momentum due to constant gear-changes.

But here’s the kicker: the batteries are recharged ‘on the fly’ by an on-board hydrogen fuel cell, giving this truck a claimed non-stop range of 1200-1900km, depending on the load and average speed.

By removing the engine and transmission, and lowering the battery pack, fuel cell and hydrogen tank until they’re between (and protected from impact by) the frame rails, the Nikola One is not only up to a ton lighter than an equivalent diesel truck, it has a significantly lower centre of gravity.

In addition, with independent electric drive-by-wire to each of the six wheels, torque vectoring, traction control, ABS and regenerative braking are merely a matter of software – no additional engineering is needed.

All of which is monitored by a 53cm touchscreen, which also displays fuel and charge levels, satnav, all-round camera images, AM/FM radio controls, aircon settings, and a dedicated internet connection to home base, allowing real-time optimising of delivery route and schedules.

Not having an engine in front of – or under – the cab has also enabled Nikola to move the driving position forward, make the cab 30 percent bigger (it has two full-size beds, a fridge/freezer and a 100cm TV!) and move the driver’s door to behind the front wheel instead of over it, so that you get in through an unobstructed doorway and walk forward between the seats, as you would in the cockpit of an airliner.

Location not yet decided

Nikola founder and CEO Trevor Milton said at the launch he’d already taken reservations for orders worth $3 billion (R40 billion). He plans to build ‘a world-class manufacturing plant’ that will create thousands of jobs, to produce his electric trucks, but doesn’t yet know where it’ll be because he’s still dickering with the authorities in several states over which one will give him the biggest tax incentives.

Nevertheless, he also announced plans to begin building a network of hydrogen refuelling stations across the United States and Canada in January 2018 – which would also be open to owners of other makes of fuel-cell powered vehicles – as well as a distribution and service agreement with Ryder Systems, which has more than 800 workshops across North America.

And the company name? Well, Elon Musk has already appropriated the surname of Nikola Tesla, inventor of alternating current and the brushless electric motor, for his electric cars, so Milton took the iconic Serbian scientist’s first name for his trucks.