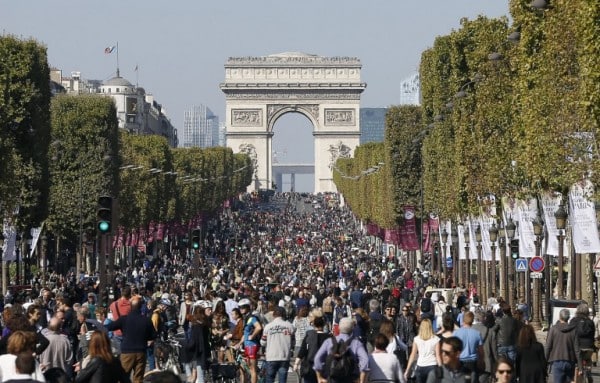 PARIS – The constant thunder of cars on Paris’ most famous boulevard will be silenced Sunday when the Champs-Elysees goes pedestrian-only for the day in the first instalment of a monthly effort to tackle pollution.

After this weekend’s pilot, the tree-lined 2km-long avenue leading to the Arc de Triomphe will be free of cars on the first Sunday of every month to coincide with the monthly free admission to the city’s museums.

Paris mayor Anne Hidalgo said: “Every foreign tourist who comes to Paris naturally wants to visit the Champs-Elysees. But we want to bring Parisians back to this emblematic place which belongs to them.

“When you walk on the avenue without the din of traffic, you rediscover perspective, the facades, the scenery.”

The boulevard attracts an average of 300,000 visitors every day, including many tourists. Vast crowds gather there for special occasions, when the road is also closed to traffic, including for New Year celebrations.

Famously, one million people thronged the avenue to celebrate France’s victory in the 1998 football World Cup.

Nine new routes will also be open to pedestrians and bicycles only every Sunday and public holiday – adding to the 13 already subject to traffic restrictions under the “Paris Respire” (Paris Breathes) anti-pollution programme.

Hidalgo, a socialist, has made fighting the smog that periodically chokes the French capital one of her top priorities.

The WHO says fine-particle air pollution is responsible for about 42,000 premature deaths in France each year.

Antananarivo – At least 47 people, including 10 children and a newly-wed…
BURKINA FASO – At least 15 people were killed and 30 injured…