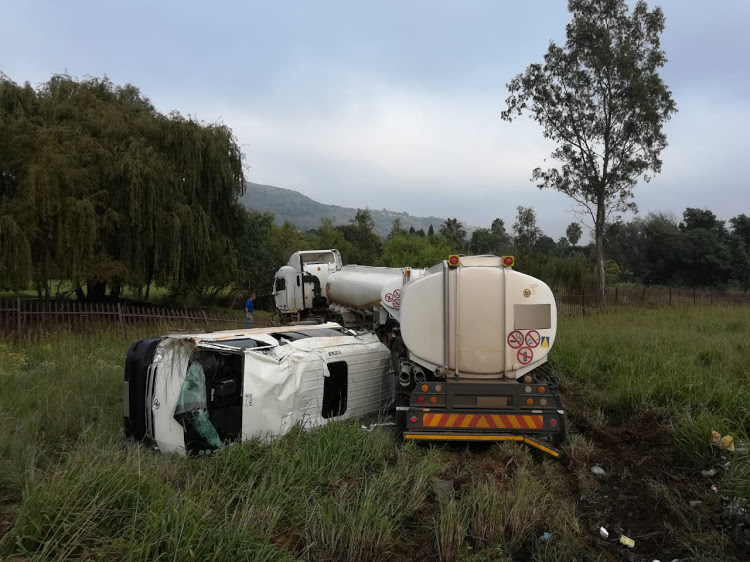 Johannesburg – Seventeen people were injured on Tuesday morning when a taxi and truck collided at the Nic Dierderiks and Hendrik Potgieter Road intersection in Strubens Valley‚ west of Johannesburg.

ER24 paramedics the taxi was found lying on its side against the truck‚ on the side of the road.

“Paramedics assessed the patients and found that a total of seventeen had sustained minor to moderate injuries. Fortunately‚ no serious injuries or fatalities were found on the scene‚” said Russel Meiring‚ ER24 spokesperson.

In a separate incident‚ a man was killed just after 7am on Tuesday morning when he was knocked over by a light motor vehicle on the M1 highway in Booysens‚ Johannesburg.

His body was found lying in the emergency lane. A light motor vehicle was found on the side of the road approximately 300 metres away.

“The man was assessed by paramedics and found to have sustained numerous injuries and showed no signs of life. Unfortunately‚ nothing could be done for the man and he was declared dead‚” said Meiring.

The driver of the car was unhurt.

JOHANNESBURG -The Limpopo Health Department has now confirmed that 22 people have…
Emam Bux Meats Wholesale and Retail have denied allegations that the zebra…
#VulaPresident – Dj Tira, Zakwe, and many other Durban artists have blocked…