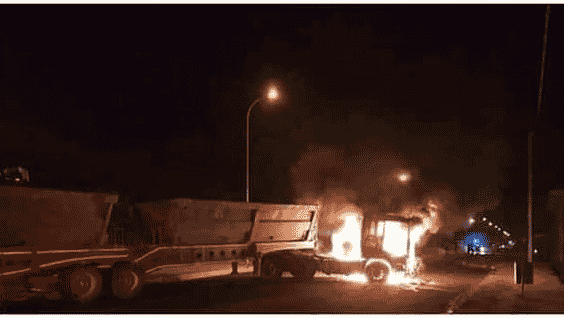 Protesters in Middelburg, Mpumalanga went on the rampage this week, burning trucks and barricading roads in protest against new tariff hikes by the Steve Tshwete Local Municipality.

A truck and a bus were torched during the violent protest.

According to Police Spokesperson, Donald Mdhluli, the protesters also tried to attack the Mhluzi Police Station.

The residents are accusing the municipality of implementing the tariffs without consulting them. They have been protesting since the beginning of the week.

Municipal services have been affected. He says police are keeping a high presence in the area.

“A truck was burnt meanwhile a bus was burnt at Middleburg and 6 suspects were arrested at Mhluzi for public violence. Several roads were blockaded in both these areas with burning tyres and some rubbles,” says Police Spokesperson Donald Mdhluli said.

Traffic flow, as well as teaching at schools, has been affected. Protesters barricaded the main roads with burning tyres.

The protests flared up after a cancellation of a community meeting with the municipality over the tariffs. The residents allege that they are now paying double in municipal tariffs.

“People are unpleased with the high rate and the tariffs that just escalated in our own town. People are paying double,” says Christopher Mnisi, a resident of Mhluzi.

Mhluzi says there was no consultation between the municipality and residents..

“it is havoc. there was a meeting where we sat for five hours, the municipality did its own roadshow where there was consultation it’s where this unrest emanate from – where people said they are displeased with the municipality” adds Mnisi.

Neil Henderson, founder of Manline and former CEO of Barloworld Transport, has…