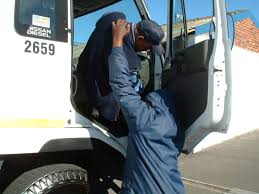 A long distance truck driver has shared his dramatic escape from imminent hijacking. He owes it to his sixth sense which he says kicked in right in time to avoid his ordeal to get any worse.

On Wednesday afternoon Mwango Gwededza was driving along R101 between Pretoria and Hammanskraal when he was flagged down by two young women just after the weighbridge turn off. He stopped and they enquired if he was going to Musina to which he told them he was destined for Loius Tritchadt, but they hopped in saying they would connect from there.

They loaded their three monstrous bags and one sat on the passenger seat and the other on the bed. Less than 10 minutes into the journey the one sitting on the bed complained she was feeling very hot and without hesitating stripped off her blouse.

“When I looked on my bed I was greeted by a ton skinned topless young woman and right there, I sensed danger”

“I played along like they would expect me to, commenting on her package that she was displaying to a stranger,me. She cared not and actually warned me to be careful not to miss the road”

“Confirming my instincts, I saw in the mirrors a white Toyota hilux following very closely behind my trailer flashing lights at me. Game on, I told myself”

Seeing my seemingly worried face the woman on the passenger seat asked what was going on and I told her.

“Ooh s**t!”, she exclaimed “It’s her husband, please stop and drop her off before we all get into trouble” she cried.

I did not listen, instead I kept on driving, blocking the hilux whenever it tried to overtake. In my mind I’m thinking, if this is really a hijacking plot I was never going to stop because only then would their mission succeed.

Do I phone my company?, but how do I explain the passengers my mind raced all over. Before I could decide, the half naked woman grabbed me by the neck and threatened to block my eyes if I did not stop.

“Eyes on the road, right hand steering the wheel, I used my left hand to hit my attacker but she didn’t let go. The other lady joined in, holding my left hand to fend off my fightback. I lost control of the truck and it veered off the road and rested in a ditch.

Two trucks coming from Hammanskraal side stopped right in the middle of the road after witnessing what happened to me. At this time the two ladies jumped out of the truck and rushed into the hilux which made a U turn and sped off towards Pretoria”.

Speaking to our correspondent Mr. Gwededza said he wanted to share his ordeal with other truckers to fore warn them. He said the women’s strategy was effective especially if they meet inexperienced truckers.

“I was lucky because I sensed danger and also where I stopped they were other trucks which put off the hijackers from proceeding, but it’s not always like that. If you are unlucky to be forced to stop where it’s convenient for them, you are in trouble”.

He mentioned that their big bags were reason enough to believe they are Zimbabwean cross boarder traders and meant no harm. However, when the bags were opened they were found to contain old newspapers and plastics.

The women’s good looks would melt any man, worse when you haven’t been with your wife for a long period, a common occurence with long distance truckers.

The woman’s plea to stop would catch many wrong footed, feel sorry and frightened at the same time and stop. Hijacking occurs when you STOP.