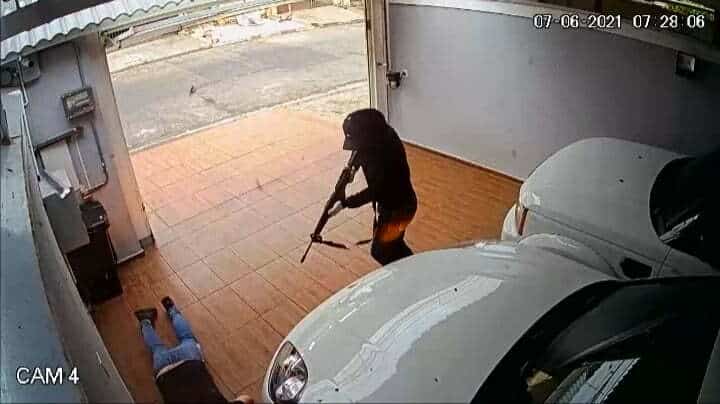 Rumours that a South African trucking company boss was gunned down for refusing to employ citizens in favour of foreign nationals that have been circulating within the trucking community are NOT TRUE.

The victim is not a trucking boss neither did the assassination happen in South Africa but in Brazil.

Two videos of the incident where a man was shot dead in his garage were shared on social media.

In one of the videos the man can be seen opening his garage, as he peeps out, a lone gunman fires several shots at him.

The AK wielding man goes on to shoot the victim as he lay helplessly in his garage.

Another video shot from outside the garage shows the gunman approach from a distance as the garage door opens. He then goes on to shoot the man who is alleged to be a lawyer.

The videos emerged days after ATDF members had a fallout with a trucking company boss refusing to let his foreign drivers go and replace them with South African drivers.

After a long exchange of words the ATDF members threaten the man that he will not be able to operate if he doesn’t comply with their demands.

“You are not going to operate, from Friday, make sure your trucks are in the yard they are not going out,” one of the ATDF members can be heard threatening the owner.

“Try it, I have automatic weapons on each truck, please try it. You will xxxx die, I tell you,” the truck owner shouts back.

The audios went viral on SA Trucker with a lot of people siding with the company owner for standing his ground.

A few days after the audios came out, some people who don’t want to see peace prevail in the trucking industry married one video of a shooting in Sao Paulo to the audio.

Allegations were that the trucking boss in the viral audio has been assassinated but that is not true.

The videos below, shared by a reputable newspaper in Brazil show how the man was gunned down.

Those fuelling the rumour, chose to pick just one of the videos which does not show much to be able to identify the place.

The second video not seen by many, shows that the incident happened in a high density surburb which turned up to be Sao Paulo.

Watch the videos below:

Durban – A wave of civil disobedience which saw trucks torched has…

Some crashes are very strange, only video proof would make one believe…
The N3 freeway is closed just before the Bergville off-ramp after a…