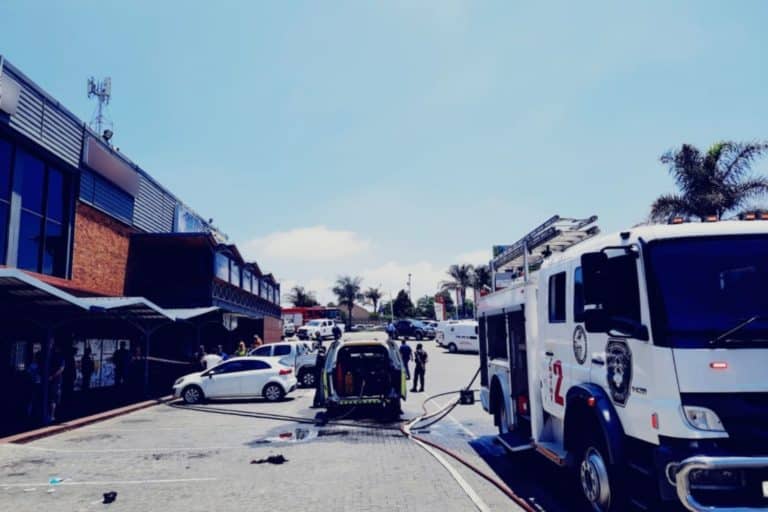 Watch: Four Dead As Fire Breaks Out At Gun Store In Johannesburg

A fierce has broken out at Silva Arms, a gun store in Johannesburg, leaving four people dead and injuring one.

According to ER24 paramedics, a 15-year-old boy is among the deceased and another man was critically injured.

The gun store located in Glananda, south of Johannesburg.

“ER24 paramedics arrived on the scene at 11h55 to find the local security forces and Fire Services already in attendance battling the blaze.”

“Explosions could be heard coming from the store. Three men, a woman and a 15-year-old boy that had apparently all been in the gun store, had been rescued by bystanders and pulled to a safe distance.”

“Medics assessed the patients and found that all five patients were critical, with their vital signs rapidly diminishing.”

“CPR and advanced life support interventions were immediately initiated in an effort to stabilise the patients.”

“Unfortunately, after some time, the two men, a woman and a young boy, succumbed to their injuries and were declared dead,” ER24 stated in a statement.

The fifth critically injured patient was transported to a nearby hospital for urgent care.

The details surrounding this incident are unknown, but local authorities were on the scene for further investigations.

ActionSA’s candidate ward councillor for the area Sarah Wissler said in a live video on Facebook “there’s live ammunition going off, please stay away from this area”.

ActionSA candidate area Sarah Wissler posted a video of the fire at Silva Arms gun store. Four people have been killed in the firehttps://t.co/GIzKaYLwlB pic.twitter.com/5LKUTdfSQ9

Two men have been arrested for possession of drugs after 80 kilograms…
Thabiso Hamilton Ndlovu, a Johannesburg businessman who instantly became famous back in…