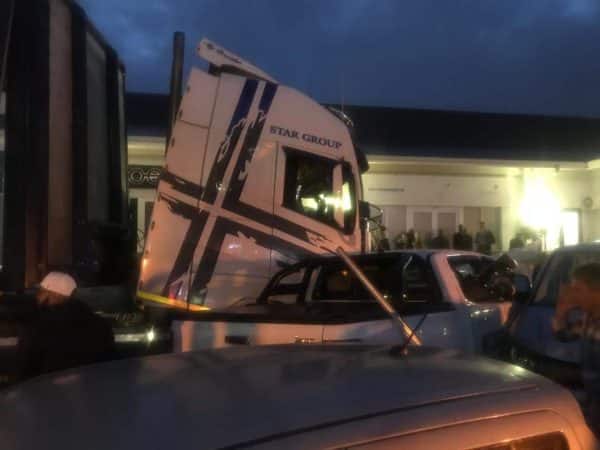 Durban – CCTV footage has captured an out of control truck plunging into several cars at Flanders Mall in Mount Edgecombe, north of Durban.

The truck driver and two other people were lucky to survive the horrific accident with moderate injuries after the truck crashed into multiple cars in the parking lot of the shopping mall on Thursday.

The incident reportedly happened on Thursday afternoon at Flanders Mall off the M41 in Mount Edgecombe.

Netcare 911 spokesperson Shawn Herbst said paramedics arrived at the scene of the accident at around 6.31pm.

“Reports from the scene indicate that the driver of a truck transporting resins lost control, crashing through at least twenty cars, [and] coming to rest next to the wall of a shopping centre.

“Medics arrived on scene to find one car stuck under the truck with no access to emergency workers to determine if there are any occupants.”

It’s believed that the truck was travelling at a high speed, on a wet road, and as it tried to make a bend, the driver lost control and crashed into the parking lot.

The driver of the truck sustained moderate injuries while two other people sustained minor injuries.

Herbst confirmed that police were at the scene of the wreck but that no arrests had been made. He added that clean-up operations would only commence in the morning due to wet conditions.

Watch the video of the aftermath below: