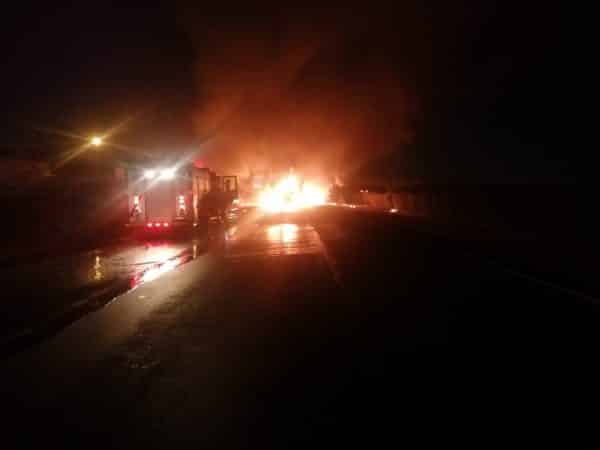 Johannesburg – Truck violence has resurfaced on South African highways with at least three trucks torched on the N3 at Vosloorus last night.

This follows warnings by All Truck Drivers Foundation (ATDF) that they will be blocking off roads in their bid to force employers to drop migrant drivers.

Warnings of attacks on trucks were sent out on various platforms during the course of the weekend.

Audio recordings from people claiming to be ATDF members warned truck drivers not to be on the road, warning that those found will be treated as traitors of ‘the revolution’.

Three trucks were burnt in the same vicinity on the N3 highway.

While circumstances of the torching of the trucks are not yet clear, it did not happen as a surprise. ATDF members have been heard before threatening to burn trucks if they don’t get what they are asking for.

Five ATDF men have been dragged to court in KZN for burning trucks during a protest of the same kind.

Videos filmed in Mpumalanga started surfacing as early as 18h20 on Sunday in which ATDF members were forcefully stopping trucks and asking other members to follow suit.

It has been reported that one truck was petrol-bombed from the top of a bridge, when it stopped blocking other trucks.

The attackers then pounced on the other trucks setting them alight before disappearing into the night.

The attacks happened at around 22h20 0n Sunday night.

On Monday morning authorities were busy removing the debris from the highway, while north bound traffic was being directed to go contraflow on the south bound carriageway.

The Ekurhuleni Metro Police Department has launched an investigation into the latest truck torching, and the Department’s Kobedi Mokheseng has urged motorists to avoid the area between Petroport and Berry Mare.

This as mop-up operation were underway on the highway.

A Durban truck owner believed to be a retired police captain, and…