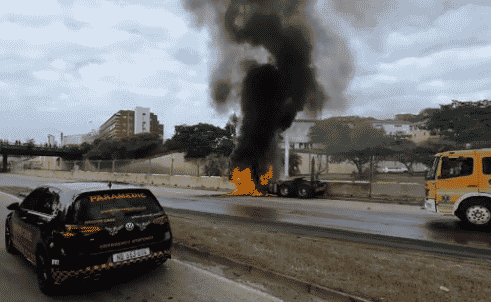 Durban – A truck driver sustained moderate injuries after his truck overturned and caught alight on the M7, heading towards Bluff, on Monday morning.

According to Garrith Jamieson from Rescue Care Paramedics the patient is currently being treated on scene by Advanced Life support paramedics before being transported to hospital.

He said only one lane is opened to traffic and there is a backlog of traffic.

Durban Fire Department is on scene fighting the blaze.

In a separate incident, a man believed to be in his 50s died in a motor bike accident in the Bayhead Road area also on Monday morning.

“Paramedics arrived on scene and found a male, believed to be in his 50s had sustained major, multiple injuries after his vehicle had collided with a truck.

“Despite advanced life support intervention and attempted resuscitation for over 30 minutes the mans injuries were too severe and unfortunately he was declared deceased on scene.

Jamieson said SAPS were on scene to further investigate the cause of the accident.