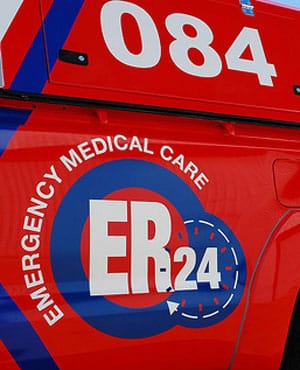 Driver shot dead while driving and collides with a bakkie

A shooting incident left one person dead and six others with various injuries.

At approximately 6pm this evening, paramedics from ER24 and other services arrived on the scene in South Road near Marlboro where they found a SUV that collided head on with a bakkie.

Upon further inspection paramedics found the male driver of the SUV with several fatal wounds that resembled gunshot wounds. There was nothing that paramedics could do for him and he was declared dead on the scene. Bystanders explained to paramedics that the SUV was apparently shot at while driving.

Six people from the bakkie was found on the scene with minor to moderate injuries. One person was transported from the scene to Edenvale Hospital. It is believed that a third vehicle was also involved in the collision, however the occupants did not sustain any injuries.

The exact circumstances surrounding the incident is not yet known. Local law enforcement attended the scene and will conduct an investigation into the matter.