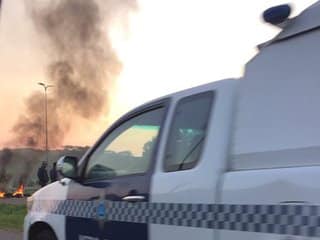 The N2 freeway has been opened in both directions between Inanda Road and Queen Nandi Drive in Durban following earlier protest action there.
Metro Police say officers are still on scene monitoring the situation.

It is understood communities unhappy over service delivery barricaded the road with rocks and burning tyres at about 2am this morning.

Metro says Inanda Road between Sea Cow Lake and the N2 is still closed to traffic.

Inanda Road between John Dory Drive and Marbleray Drive in Newlands East is also a no go area.

The R102 near the Tongaat Home Affairs in the Hambanathi area on the north coast is also affected.