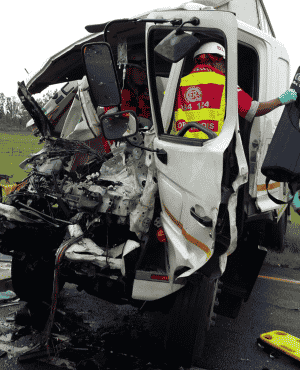 Pretoria – The driver of a diesel tanker was killed when he slammed into the back of a second truck on the N4 on Thursday morning, Tshwane emergency services said.

A massive fire broke out and the N4 west toward Brits was closed to traffic following the accident shortly after 12:00, spokesperson Johan Pieterse said.

The accident happened between the K8 (Old Rosslyn Road) and R80 (Mabopane freeway).

The tanker, carrying 16 500l of diesel, slammed into the back of a second truck which had apparently slowed down or come to a halt in the left lane.

The fire burnt itself out, Pieterse said. He advised motorists to avoid the freeway. Police were on the scene investigating the death.

The driver of the first truck was taken to hospital with minor injuries.

CAPE TOWN – Law enforcement has been deployed to the N2 highway…