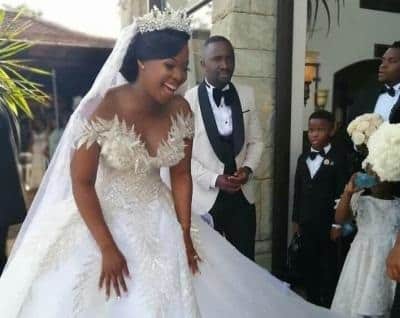 After regreting pulling off probably the biggest show-off in SA, Sam Mshengu has shown signs of reforming with a discreet wedding in KZN.
Total
1
Shares
Share 1
Tweet 0
Pin it 0

Young Mpumalanga trucker millionaire Sam “Mshengu” Chabalala (23) has proved to be serious with being discreet when it comes to his life and business after secretly wedding his partner at the weekend in KwaZulu Natal.

In September Mshengu warned his followers against sharing their success stories on social media, “as there are jealous people watching”.

Not even his own wedding to longtime partner Lerato Legodi (28) this weekend was much publicised, when she and the trucker millionaire tied the knot at the Zimbali Resort in KwaZulu-Natal on Saturday.

The only photos of them from their big day were reportedly “leaked” on Instagram.

Daily Sun has further reported that a guest informed them there were fewer than 200 guests and that they only got a bemused answer about the ceremony from the groom’s attorney, who claimed he didn’t even know his client was getting married.

The businessman will probably have a short honeymoon as he is expected back in the Witbank Magistrates’ Court on Friday, facing charges of alleged bribery, corruption, possession of an unlicensed firearm and fraud in terms of contravening the Immigration Act.

He was arrested in September after an alleged attempt to pay home affairs officials R40,000 “to destroy reports of a fraudulently obtained South African identity document against him”, according to the Hawks.

An investigation of Chabalala’s citizenship status had earlier been initiated by the department of home affairs, with reports suggesting that he is actually from Zimbabwe and may have allegedly obtained his South African citizenship illegally. The Hawks, however, are apparently still trying to ascertain where he really comes from.

He allegedly only got his ID in 2015 and the woman he claimed was his mother allegedly said she’d never heard of him. Bethal Hospital apparently also had no record of his claimed birth. He goes by his “clan name”, Mshengu.

The accused’s lawyer, however, told said that the state had a “weak case” and would struggle to prove it.

ALSO READ: Young trucker millionaire explains how he got it all started

Most South Africans had never heard of the young millionaire until he became the face of a flashy convoy of supercars that travelled to the Durban July this year.

At the time, The Citizen reported that Mshengu was an Mpumalanga-based businessman who set tongues wagging after having the longest convoy at the event, boasting top-of-the-range cars, with many asking how he had made his money. Of the 72 cars, 10 were his.

In September, in a lengthy social media post, Mshengu paid tribute to his “first” employee and friend, Nkosinathi Emmanuel Ngcongo, who was killed in a suspected hit, with two shots confirmed to his chest, and one to his head, in what has become an ongoing murder case.

Mshengu alleged that “they” went for Ngcongo after failing to kill him in prison.

He went on to thank his supporters and slammed those who pretended to be his friends but never showed up for him when he was in trouble with the law.

“I don’t blame them as they say, ‘when days are dark friends are few’.”

Mshengu further warned those who used social media to show off their success to stop, claiming there were “jealous” people who watched the social media streets in search of those to destroy.

“Sadly our own black people are the ones that come after another black people to destroy them. But why, black people? My arrest is an act of jealousy! But all what I can say is even they arrest me they can’t arrest the grace in me, God’s plan shall never fail. Even Mandela was in jail for many years but still he became the president,” he said.

Claiming to be born in Makwarela, Venda, he had earlier opened up on radio in July about his difficult upbringing and how he eventually made it in the logistics business.

He registered his company, Sam Holdings Trading, in 2014 and used his boss’ trucks to start his business.

Durban – Tens of thousands of holidaymakers are expected to head to…

Nelspruit – Four people were killed on Thursday morning when a truck…