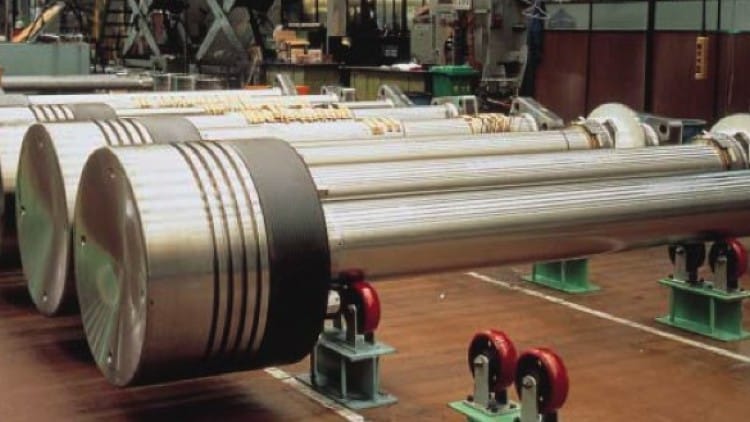 Shipping goods from China to Africa is big business. And when we say big, we’re talking 400m long ships that weigh 170,974 tons. The cargo ships in question can carry 16,000x6m shipping containers at a breakneck speed of 31 knots.

That’s a lot more oomph than the typical 20-knot cruiser, and the reason for the extra push is the world’s largest engine. The 109,000-horsepower Wärtsilä-Sulzer RTA96-C, which first set sail in the Emma Mærsk in 2006, weighs in at around 2,300 tons, and it’s 13,2m tall and 27m long. In other words, the TRA96 is the height of a four-story building, and longer than a Horse and a superlink. Within that massive exterior rests 14 cylinders that each consume 180ml of diesel fuel every cycle. And, if you like torque, there’s enough twist to rip an M1 tank to shreds, though the massive mill churns at only 102 rpm.

That’s a lot of motor to ponder, and we’d be imagining the size of that camshaft, if it had one. This turbocharged two-stroke features common rail tech that utilizes a high-pressure fuel rail to supply fuel to individual solenoid valves. That means improved fuel economy and better performance, which is nothing short of essential in such a massive ship.

So far there are 25 such engines patrolling the world’s oceans, and another 86 are on the way. And since these mills can get a shipment from China to Africa in four fewer days than their competitors, we wouldn’t be surprised to see still more engines on the way.

Namibia – A Namibian Traffic official is in trouble with the law…