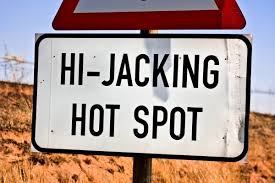 A warning has gone out to drivers who frequent the intersection of South Coast and Edwin Swales Drive in Rossburgh to be aware of the increasing hijackings and smash and grabs.

Both Montclair and Brighton Beach SAPS have had reports of these crimes on a daily basis. A report from Brighton Beach SAPS communications officer Lt Mbuso Gumede said truckloads secured with tarpaulins are usually targeted and anything unsecured is a bonus for the criminals.

There have been several incidents where the criminals forced open containers stealing whatever they get from inside.

Spare wheels and batteries are also an easy job for them so the best thing is to make sure you don’t lose sight of your vehicle.

The criminals also target small cars stopping at the robots near the Rossburgh Station smashing and grabbing anything they can and disappearing onto the rail tracks.

Motorists are urged to be extra vigilant especially at South Coast and Edwin Swales dr (M7) “Make sure all doors are locked and valuables out of reach, not visible from outside. Someone passing may seize a chance to smash and grab these items if they can see them” said Lt Gumede.

These crimes happen anytime of the day but mainly at night.

Blue light patrols are being done at the intersection.