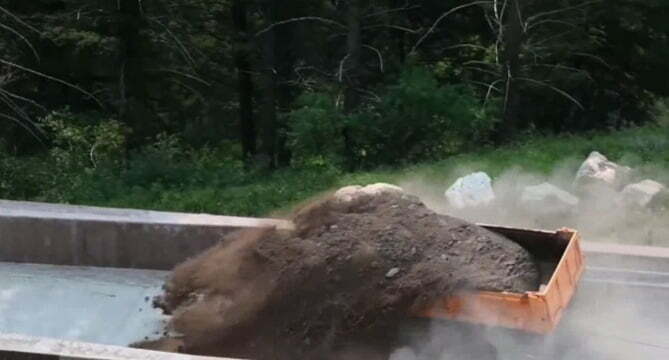 When a truck spirals out of control down a steep slope the one thing that may keep the trucker sane is when he knows there is an arrestor bed at the bottom of the slope.

“If only I can control it until the arrestor,” he silently prays.

This brave trucker however, wasn’t in such a predicament, he was actually testing the ability of the runaway truck arrestor for the Wyoming Department of Transportation (WYDOT) in the US.

WYDOT conducted the dramatic test of a runaway truck arrestor system on Teton Pass — and the whole thing was caught on video.

The test was done as a way for officials to ensure that the catch-cable system was working properly.

The catch-net cable truck arrestor uses a series of 8 to 10 cable nets that span across a long, narrow ramp adjacent to the highway to stop runaway vehicles.

Here in South Africa, our arrestor beds are made of a bank of single sized marble-like aggregate (commonly referred to as pea gravel) that is kept free of fine material and other contaminants.

There are no catch cables, the runaway truck is expected to lose momentum and stop as it nose dives into the pea gravel.

According to CDL Life News, the Wyoming runaway truck arrestor was last used in June 2021, when a pickup driver lost his brakes and utilized the system.

The arrestor was heavily damaged in September 2019 when it was used by a truck hauling a load of logs and required extensive repair.

During the test run of the truck arrestor, WYDOT put professional performance driver Arnold Korbmacher behind the wheel of a 58,000-pound (26 300kg) sand truck and had him hit speeds of 60 m.p.h. (96km/h) before using the arrestor.

The arrestor managed to stop the truck and the test was considered a success.

Check out the video below.

Cape Town – Taxi operators have remained adamant that their fines and…