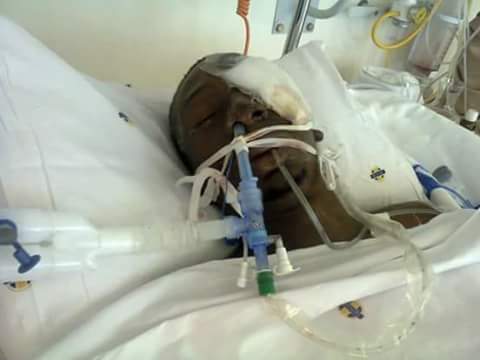 What I learnt after surviving horrific Van Reenen crash

A Johannesburg based truck driver has shared his testimony of how God’s grace is the reason he lives today after surviving a horrific crash on the Van Reenen pass.

34-year-old Misi (not his real name) says he was involved in a serious accident while driving down Van Reenen pass in June 2014. He was critically injured and lost consciousness only working up a day after the crash.

“Let me just push to get to Tugela then I will sleep there, after all I can’t sleep here because we don’t have an account with any of the Harrismith truck stops,” I told myself.

“Volume on full blast, I put my favourite house music CD and carried on,

Down the Wafa-wafa bends I rolled, eyes wide open and everything seemingly okay,” he added.

Misi veered off the road and crashed with his Argosy Freightliner. He was lucky to have been thrown out as the truck rolled down the embankment crashing several trees on its way down. There was no way he could have survived had he remained in the truck cab. The cab was extensively damaged to the extent that the roof was squashed onto the steering wheel.

Misi only woke up from a comma close to 24hrs after the accident.

He says from the scene of the crash he could only remember what happened about 8km before, suggesting for that whole distance he was semi-conscious and obviously the truck on auto pilot.

“I am very luck to be alive, I don’t even know how I crashed and even after visiting the crash scene I can’t recall anything,” he said thanking God for saving his life.

After the accident Misi was transferred to a private hospital in Johannesburg. He broke his hand, 2 ribs and had a big cut at the back of his head.

“I am sharing this so that the next man should know how bad it could turn out for him if he ignores early warning signs of fatigue. Had I planned my journey properly I would have rested in Wardens before proceeding to Tugela.”

“Driving all the way from Johannesburg without taking short breaks definitely caused my crash.”

He urged all truck drivers to make sure they are ready for the road not to just dive in because that could spell disaster for other road users.

“Never ignore the slightest warning of fatigue, because you might only get one before disaster strikes,” he said in conclusion.

At 08h15 on Monday morning, Netcare 911 Paramedics and other services responded…