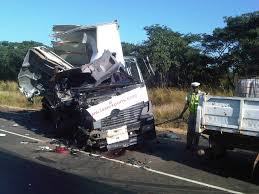 Zimbabwean truck driver in trouble after collision in Zambia

A Zimbabwean truck driver Sam Murape 37, is in trouble in Ndola Zambia after he was involved in an accident with a local truck.

It is reported that Sam was driving from Solwezi to South Africa at around 2000hrs on Friday night in Ndola when a Zambian registered truck coming from the opposite direction bust its front tyre and encroched onto his lane causing the two trucks to side swipe.

The Zambian registered truck was badly damaged that it had to be towed from the scene while Sam’s truck only had scratch marks on the trailer and could still move.

The real problem started when the owner of the Zambian truck, an ex-policeman recognised the name of the owner of Sam’s truck one Sugen Krishna who he says was wanted in Ndola for culpable homicide.

Ndola Police has confirmed that indeed a Sugen Krishna was given bail after knocking dead a pedestrian on the same road some 14 years ago and has never been found since then.

The owner of the Zambian truck who is a well known and powerful man in the town is alleged to have instructed the police to keep both driver and truck until Sugen Krishna come to face his charges or fix his truck according to a source at the police station.

It remains to be seen what will happen on Monday when he goes to court if at all there are any charges laid against him.

Mpumalanga – The Lowveld Airshow in Nelspruit, Mpumalanga, together with the National…