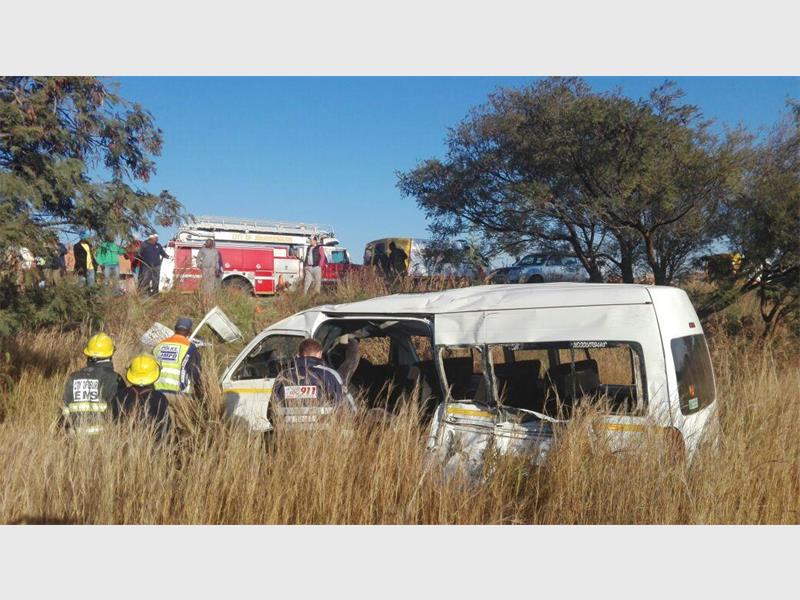 Paramedics on scene looking for the injured.

Two men were killed and 12 other people were injured after a taxi rolled down an embankment on Hendrik Potgieter after colliding with a truck. Road early on the morning of 29 June. The taxi collided with a truck and the impact caused the taxi driver to lose control of his vehicle. The driver of the truck was then allegedly assaulted by other taxi drivers who stopped at the scene.

ER24 paramedics and Netcare 911, along with other medical services, arrived on the scene at 7.30am and found the taxi standing upright, down a small embankment on the side of the road.

ER24 spokesperson Werner Wermaak said when the paramedics inspected the scene, they discovered the bodies of two men lying motionless next to the vehicle. “Unfortunately, both men sustained fatal injuries in this incident. Nothing more could be done for them, and they were declared dead on scene,” he said. Both men were passengers in the taxi.

Twelve other patients were scattered around the scene, and were assessed by emergency services. The injuries found ranged from minor to serious.

Paramedics treated the patients and provided the seriously injured with advanced life support. Once stable, the patients were transported to various hospitals, among them the Leratong and Helen Joseph Hospitals.