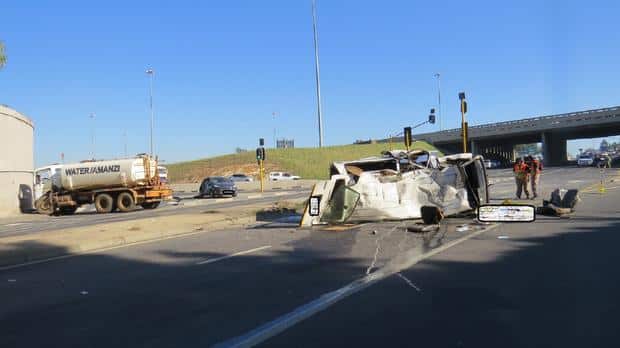 Johannesburg – Two people were killed and 15 others injured after three vehicles were involved in a crash on the N12 freeway in Ekurhuleni on Monday morning, emergency services said.

The City of Ekurhuleni’s disaster and emergency management services (Dems) rescue team from Rynfield fire station responded to the scene after receiving the call around 7:30am.

“On arrival, a water tanker truck with a driver only, hatchback light motor vehicle with two occupants and a minibus taxi with 17 occupants, driver inclusive, were involved in a crash,” Dems spokesperson WM Ntladi said in a statement.

A taxi was found on its side with multiple patients still trapped inside. Specialised rescue tools had to be used to free the trapped patients from the wreckage before they were transported to medical facilities.

“Two patients from the taxi were declared dead on the scene by paramedics, 17 others from all three vehicles were transported to nearby medical facilities by various ambulance services for further medical care,” Ntladi added.

The cause of the crash was still being investigated by the City of Ekurhuleni traffic officers. African News Agency (ANA)

Mbombela – A truck driver and his passenger have been killed and…
Nine people died in two separate Limpopo car accidents on Sunday morning.…