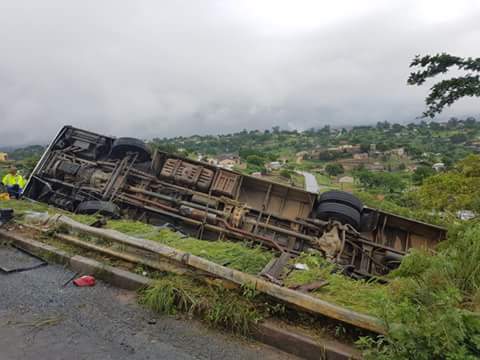 Dozens of people have been injured after a fully loaded bus lost control and rolled down a bank on the M1 near Savannah Park just after 6:20am this morning.

Rescue Care Paramedics arrived on the scene to find total chaos. A loaded bus had left the roadway and overturned down the bank coming to rest on its side.

At this stage, the count of patients is that three people have unfortunately passed away on the scene and seventy-one others have sustained injuries ranging from minor to critical.

The EMRS Helicopter landed on the scene to assist with patient care. Multiple ambulances were used to assist in transporting the multiple patients from the scene to various Durban Hospitals for the further care that they required.

At this stage, the exact cause of the collision is unknown however the Durban Accident Unit were on scene and will be investigating further.

Durban – A horrific accident involving a minibus taxi and a bakkie…

At 19h29 on Tuesday evening Netcare 911 paramedics responded to a…