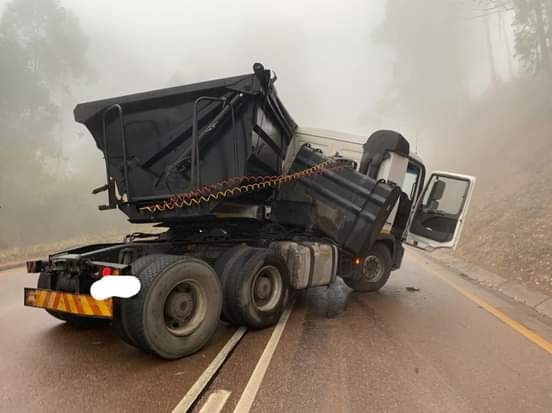 This is what’s killing side tipper truckers and others

I assume if you have been in the SA trucking industry long enough, you will recognise him.

My 10 years working at the same company and doing almost all the side tipper routes in the country has taught me a lot.

There are trucking companies that cannot go for a month without at least one of their trucks being involved in a serious crash. Some of them so obvious that a newbie in the trucking industry will guess correctly.

Chase after the money if you want it

The most common factor amongst these companies is the pay-per-load system. Most of them do not even pay a basic salary. You start from 0 cents at the beginning of the month and you only earn after offloading your first load. Keyword being ‘offloading’, if you have not yet offloaded or completed the trip you remain at zero.

The pay-per-load salary structure is popular amongst small trucking companies who try to maximise on the driver’s performance. Some bigger companies have also joined in on the exploitative pay structure. The result is regular fleet expansion and big profits for the companies while drivers die one after the other.

This system implies that if you don’t chase after the money you won’t get it. This is why you see side tipper trucks are always rushing.

One Durban company that I know, for a round trip Durban-Kuruman and back they pay you only R1700 and there is no basic or any other allowance.

What it means for their drivers is, if they want to make R17 000 that month, they should do 10 round trips.

From Durban to Kuruman it’s roughly 1 000km which takes a truck about 15 hours driving under normal circumstances, albeit without resting.

Believe you me, there are drivers who are driving that distance without stopping for a break. They even boast of doing only 14 hours to get to Durban from Kuruman, I don’t know if their truck speeds are governed or not.

You and me may blame them for putting their lives and others at risk but if you put yourself in their shoes you may understand.

Their choices are limited, employers are competing to pay the least, if you leave your job today, you are most likely to get a pay cut on your next job than a pay rise.

The situation then forces the drivers to try their best to do as many loads as possible to get a decent wage.

This practice goes unchallenged as the bosses only aim to beat the gazetted truck driver minimum wage.

You will be surprised that in August 2021, there are still truck drivers doing long-distance and pulling a side tipper interlink who get as little as R13 000.

You may have heard that controllers are the biggest problem, always pushing drivers to their limit. Not anymore, the pay-per-load system itself pushes you. If you don’t push, you earn peanuts.

Both at the mines and at the habour, delays are guaranteed. You wait hours to load at the mine and when you arrive at the habour you are also met with delays. The biggest problem with these delays is that you will be following the queue. If you sneeze you lose, there is always that one or two truckers ready to jump the queue if you don’t pay attention.

It then means that if you don’t park off and rest before getting to the loading or offloading point, you will not rest.

We end up having truckers who have no rest stops and chasing after the Rand at the same time, a fertile recipe for disaster.

Some bosses, who have never been drivers themselves, would not understand that when I arrive at the mine at 3pm and leave at 7am it doesn’t mean I was sleeping but following the queue.

Then there are those bosses who always compare you with colleagues.

You always have to be like the one ‘performing better’ at that time. Performing better means – ahead of everyone, according to them. They want you to race against each other, but they don’t realise that we don’t tire at the same time neither do we perform the same.

Bosses need to understand that it’s not always obvious that if one trucker can do it then everyone else can.

I use energy drinks, well knowing that they are not good for my health. We may just not be using it the same way. I use them to help me focus or increase my concentration.

Fellow truckers, however, use them to try to keep themselves awake. Don’t fool yourself truckers, energy drinks are worthless in compensating sleep debt. You just have to sleep it off to pay.

You may think that they are working for you as you go for days without sleeping and pushing loads. Unfortunately, you may also not live to tell the tale of how they killed you. If somehow you survive those single vehicle accidents where you just leave the road by yourself and land in a farm or river, you will tell us.

If you don’t sleep enough when you are supposed to, you are bound to be easily fatigued. Sleep truckers , as much as you can.

Another crew prone to accidents is those who go up empty and come back loaded. These ones are under pressure from their bosses to do more loads to cover up for the empty run.

This happens in bigger companies which have special trailers which can only load high-density loads like manganese, iron ore and chrome.

Such trailers are too small to load low-density like grain so the trucks are forced to run to the mine empty.

With high volume trailers, companies have options of loading from the habour towns and deliver inland on their way to the mines. This leverages the company’s income thereby easing pressure on the driver.

Coming back to boss Heno, we have strict operating hours which governs us to work only up to 15 hours a day. This gives me a daily guarantee of at most 9 hours rest. If one day I feel I can drive for longer I can do it but have to park off at or before 11pm and only start at 4am the following morning.

While the hours are good I also get paid above the gazetted minimum wage and get a bonus for a kilometre driven, I think it’s fair. At least I am happy, and safe.

Just this past week, a video was circulating on social media, where a driver dosed off while driving and crash landed in a sewage dam near Kimberley. The accident happened after 1am which means either the company is not strict on operating times or the driver was in contravention.

Some companies have hours of operation but the close is only brought up when a driver f***s up. The company well knows that drivers are contravening work hours but keep quiet because money is coming in.

Until companies start controlling drivers’ hours of work, pay basic plus overtime, stop pushing drivers we will continue to lose drivers day in day out. As for drivers, as long as we agree to chase after money we will die chasing but never catching it.

Durban – Two people were injured in crash between a bus and…

The new system will give power to prospective learner licence and driving licence applicants to determine the date, time and